He has a nice bit of a drawl .. from a football interview

Another one with a good job.

Kirk Bryant enters his first season on the Texas Tech football staff as he was named a senior offensive analyst by head coach Joey McGuire on Dec. 7.

Bryant arrives in Lubbock following two seasons as the inside receivers coach and recruiting coach at Austin Peay. Bryant was hired by the Governors prior to their 2021 spring season where Austin Peay finished 4-2 in Ohio Valley Conference (OVC) play, which included a pair of ranks wins over No. 7 Jacksonville State and No. 13 Murray State. Austin Peay was a combined 8-4 in conference games during Bryant's two seasons on staff.

Prior to his time with the Governors, Bryant spent four seasons at Baylor where he worked alongside head coach Joey McGuire. Bryant was an offensive graduate assistant with the running backs and wide receiver groups for the 2017-18 seasons before moving to a quality control role with the Bears' quarterbacks for the 2019-20 campaigns.

It would be nice if we have another JoJo/Jordan season. 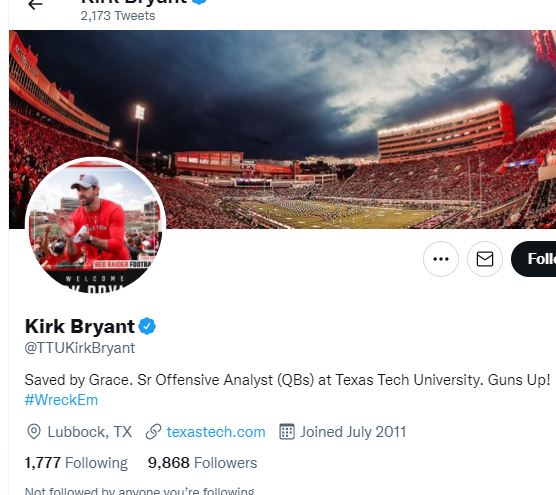 Only negative is his job is in Lubbock TX (my opinion only)!

I feel like the audience is going to gravitate towards him. Texas + football = another season of The Bachelor oh my!

Saw this and thought it was funny. Texas Tech head coach talking about Kirk being on the show.

Page 1 of 2
+5
GuardianAngel
Jeepers
ariwolf
southerngirlatheart
bluwavz
9 posters
Permissions in this forum:
You cannot reply to topics in this forum