@ariwolf me either! That picture certainly shows it.

What does La Havre Strangler mean? He added that to his bio. 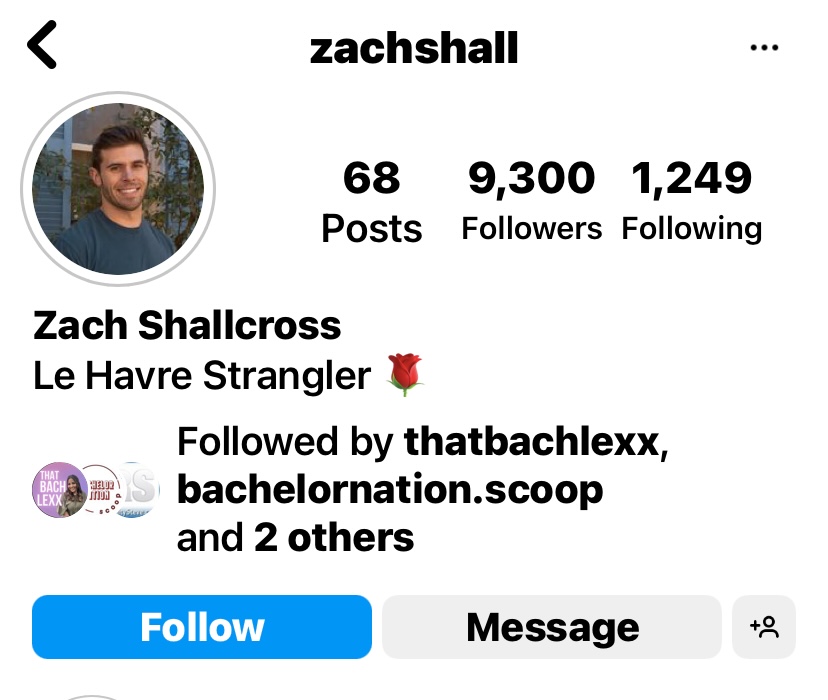 southerngirlatheart wrote:What does La Havre Strangler mean? He added that to his bio.

It’s what appeared under his name last episode, during the group date I think.

I would have never guessed Zach is as young as he is as he seems very mature.

Anyone know where I can watch the entire interview video ?

I found this podcast with the whole interview but it’s audio only.

Nothing from Zachs interview sounds like he self eliminated.
Listen to around/after minute 47/48 where he talks about Rachel being upset.

He says she is an incredible woman and that if there are guys who reject her, cannot see that about her  your better off without them, there are better guys out there for her, us the Rachel guys  we see something in you, we have your back through it all and I would tell her that We support you, you’re better off without them, I know it’s painful and it’s tough, no one wants to be rejected we want your heart.
“It’s tough and she’s a trouper and she still handled it incredibly well “ (thanks the hosts quietly for saying that they are glad she had him around then ).
(None of this is actual, my typing is terrible !!! But I got the gist typed up)

There is no way this guy self eliminated/dumped her.

“And that week was an unreal week, still…still”. Man he was not a dumper whatever else happened in the season.
I don’t believe that part of the spoiler.
I’d love to see what you guys think when listening now knowing the spoilers.

I like Zach but imo he was a producers fav.  His first 1-1 imo was scripted before Rachel even met him.  Not many guys get a background film created.  He has a lot of camera time.  His next 1-1 IMO is also producer instigated.  IMO R had to ensure 3 guys wanted to go to f3.  Tino IMO is her obv fav so couldn’t take him on second 1-1 and had just received GDR and Aven had just had 1-1.  Zach had established a connection with her from 1-1 so obv choice and believable f2/3. Producers may have also wanted him to have more screen time.   I’m curious as to how he leaves as think given his edit and effort put into his first 1-1 he could a serious bach contender.  He and Nate were in LA same time in June ? ???
Not saying Rachel didn’t have feelings for him just that imo Tino was always F1 and the format of the show is what it is.

To me the interview, Zachs words and emotion indicated that he didn’t SELF eliminate. Perhaps he was eliminated by her but it would be Rachel’s choice.
ETA I’m not saying the spoiler that Tino is f1 is wrong (though it maybe), I’m saying that I find it hard to believe the spoiler that Zach self eliminated after listening to that interview. He was literally rambling on about being there for Rachel and how wonderful she is.

but not in Texas, in cali. Does not know where he will live next.