Three names is too much to put in the topic title so I'm going with first names only.

butterflylove wrote:Saw this on Facebook and came rushing!! It's not on IG yet, so I wasn't expecting it to pop up when I opened FB - but the girl was right about The Project announcement, just the wrong day!

PRO basketballer might be a stretch for Melbourne’s new Bachelor Felix Von Hofe, but there are plenty of other monikers the towering stallion has amassed.

Let’s just say the collective agreement is Von Hofe has had far more accomplishments off court than on it as a Melbourne Tiger.

The former Wesley boy is well known at the racetrack, with Bachelor producers perhaps finally finding someone the ordinary woman might just like – ie not a quivering, socially progressive, sooky snowflake. Punters are well versed with Von Hofe on screen; the Lothario (right) reads the odds for Sportsbet, who we hear were just as surprised to see their thoroughbred pop up as Ten’s new Bachie. We have it on good authority he also has plenty of form – no, not just at the track but with breaking hearts kindly.

The former Wesley boy is well known at the racetrack, with Bachelor producers perhaps finally finding someone the ordinary woman might just like – ie not a quivering, socially progressive, sooky snowflake

(sorry Herald Sun, you're wrong, if a man isn't socially progressive he's utterly uninteresting to me)

Bobette wrote:Ahhhhh, The Herald Sun.  Clearly struggling for new things to write about now that their far right propaganda assault on our democracy has ended in spectacular failure.

Hot Tip Herald Sun: most ordinary Australian women are no more interested in dating an arrogant F-boy than we are in re-electing a transphobic, corrupt, misogynistic PM.

Osher was coy on how many women.
No candles or fairylights.

.@TheBachelorAU's back for its tenth season and it's bound to bring more love than the series has ever seen. We meet this year's Bachelors. All 3 of them. #TheBachelorAU #TheProjectTV pic.twitter.com/2FgtMYb0jx

Bobette wrote:- Felix sounds like he's trying to sell us a kitchen appliance on a late night infomercial (do they still have those?

).  I'll struggle to believe anything he says has not been scripted.

- I agree about the unexpected accent.  Presume they'll make him the mature/romantic lead compared to Sporty Felix and "alternative" (though actually conservative) Jed.

I can see why they went with these three; trying to appeal to multiple audiences.  Choose your favourite just like the Spice Girls (so long as your preference is white of course

Off to wade through the complaints in the comments to look for clues...

butterflylove wrote:@Bobette definitely trying to appeal to different audience's with the three guys and I agree with your sentiments for them.

@Dumb they haven't said how many contestants and Osher side stepped the question with asked if there was going to be 3 times the women.

ETA: Read the 10Play article and it says there will be "more Bachelorettes than ever before".

Sorry. None of those do anything for me. Trying too hard and it will be a mess. Hopefully that will finally put an end to it.

Jed is the most interesting to me because he looks the least vanilla but the podcast suggests he's more conservative than he appears so... meh.

Meanwhile Todd's still messing with us 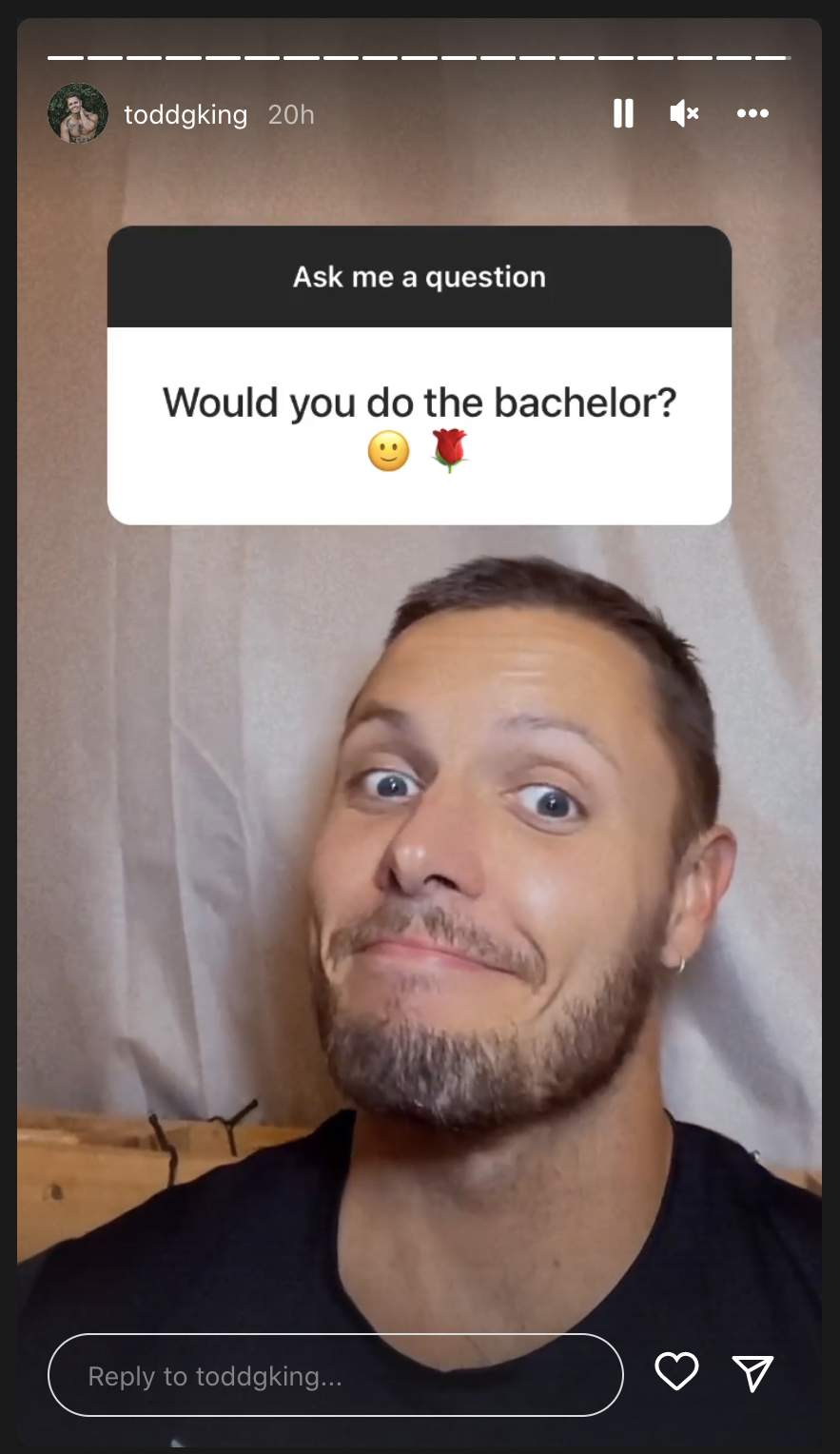 The 2 brunettes are nice looking! The shirtless tat guy does nothing for me, except he has the cahones to wear a very stylish suit! I may end up liking him best though!

Norcalgal wrote:The 2 brunettes are nice looking! The shirtless tat guy does nothing for me, except he has the cahones to wear a very stylish suit! I may end up liking him best though!

Some of Jed's old Facebook comments have resurfaced from when he was 14/15. And they are disgusting to say the least. 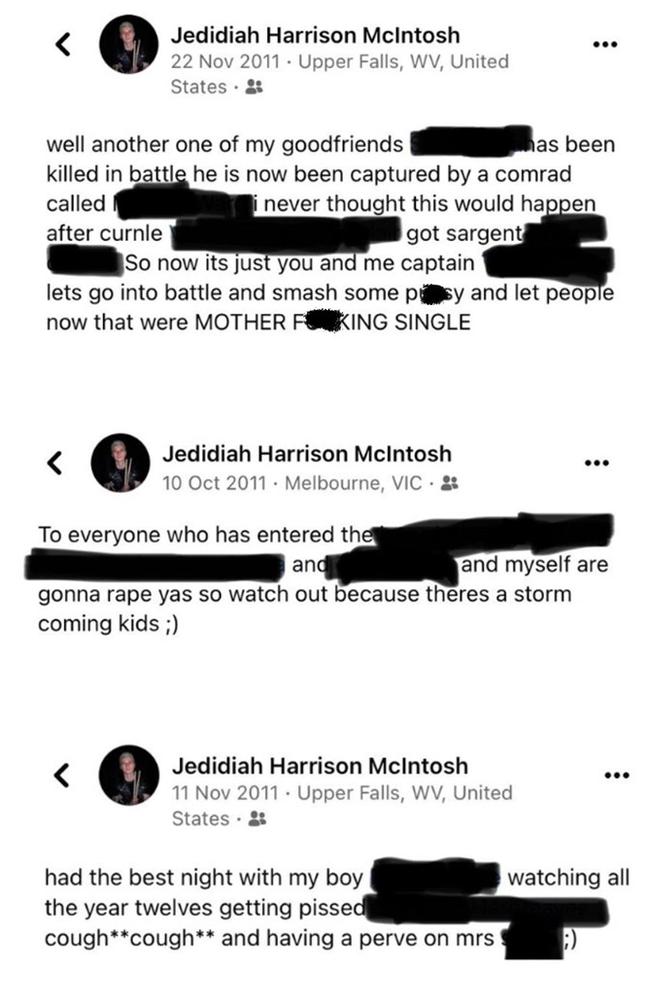 The Telegraph either approached him during filming or CH10 allowed him to make a comment to the newspaper after they all become aware, and he released the statement:

I’m shocked seeing these posts. These posts are from over 10 years ago and I don’t have any recollection of making them. Anyone who knows me knows this is not who I am. As a kid we say things not understanding the gravity of the language used but I can adamantly say as an adult I do not agree with the use of language and sentiment of the posts. I have the upmost respect for women, am a strong advocate for assault victims and would never want to cause any harm or hurt to anyone.

Norcalgal wrote:The 2 brunettes are nice looking! The shirtless tat guy does nothing for me, except he has the cahones to wear a very stylish suit! I may end up liking him best though!

Some of Jed's old Facebook comments have resurfaced from when he was 14/15. And they are disgusting to say the least.

Absolutely abhorrent. In the era of #MeToo and in the wake of everything last year that pertains to this (the anger of which was highlighted by the Women’s March on parliament in March), this is a staggeringly tasteless and disrespectful choice for the franchise to continue with. “It happened a decade ago” isn’t going to cut it.

Fourteen can be a tumultuous age for boys and I have a feeling the above comments were probably Jed trying to fit in with a particular group, but they should absolutely have ruled him out of contention.

You have to wonder which work experience kid TPTB assigns the task of background checking to because something like this comes to light EVERY season.  They need to take screening more seriously.

JMO - “are gonna r*pe yas” is not someone just trying to fit in.

The other stuff will be stupidly chalked up to ‘boys will be boys’ (as if that is some sort of reasonable explanation) by the people who want to try and justify it and make it seem like it’s someone who just got caught up in things, but “gonna r*pe yas” is absolutely despicable language. At any age. It demonstrates a fundamentally problematic and misogynistic outlook.

I wasn't justifying the comments, just offering my opinion on why they might have been made.  I reiterate, he shouldn't have been cast and Ch 10 need to do more thorough background checks, IMO.  If this kind of stuff can be unearthed with a quick Google, someone isn't doing their job.

@butterflylove I agree it's interesting he was allowed to comment - TPTB clearly in damage control mode.  I doubt they'll drop him and wonder how this will affect his portrayal; will they write him off as a villain and throw him under the edit bus, or try to redeem him with a soft spiritual spin?

Bobette wrote:@butterflylove I agree it's interesting he was allowed to comment - TPTB clearly in damage control mode.  I doubt they'll drop him and wonder how this will affect his portrayal; will they write him off as a villain and throw him under the edit bus, or try to redeem him with a soft spiritual spin?

I honestly don't think they'll do anything about it. I saw a mixed bag of comments about it all too, some playing it off as he was 14 and didn't know better and others saying he should never have been cast. I'm someone (and I don't excuse the comments whatsoever they should never have been made, I don't care how old you are), who doesn't judge someone on just one thing. I'd hate to only be known for my past mistakes and not the person I am now, who has had the opportunity to grow, learn and be a better version of myself. So I guess for the meantime, I'm giving him the benefit of the doubt and hope that age and time has matured him quite a lot and he does value and align with his statement.

The comments were wrong even if he was only 14. You should know better at 14. That said I know 14/15 year olds having kids myself around that age and it's definitely THE age where boys can go through an 'edgy' phase where they'll say anything if they think it'll get a reaction or if they think it's rebellious or whatever. That doesn't mean it's something to condone, but if the person involved comes out the other side of it going 'wow I was seriously a little turd, I would never say that now' then it's forgiveable.

I do think tptb should have a) known about it and b) either not cast him - there are plenty of good men out there with no such skeletons in their SM closet! but c) it just keeps happening so I almost wonder if they think 'all publicity is good publicity'.