Updates on Past Contestants With No Thread - All Seasons - Discussion - #4

Heading into the last long weekend of #Summer, here's a sneak peek of the sexy new bar at #BachelorinParadiseCA!

Muskoka Brewery is in Bracebridge. It doesn't mean that's where it was filmed but I had a look around Bracebridge and didn't see anything that resembles the s/shots we have. I did notice the same wrought iron railing to the left of the bar.

Attention #BachelorNation...
“The Bachelorette: The Men Tell All” will air on Monday, August 29, 2022 at 8p|7c on @ABCNetwork.
(ABC/Craig Sjodin)#TheBachelorette @BacheloretteABC pic.twitter.com/YGPcKd7Zhl

The countdown isn’t exactly on for Kaitlyn Bristowe and Jason Tartick to tie the knot after the #BachelorNation stars previously planned to wed on New Year’s Eve. https://t.co/RYYGyuzgC9

As #BachelorNation continue to wonder how Gabby and Rachel's #Bachelorette season would look if Kaitlyn (and Tayshia) were cohosting, the season 11 lead is weighing in. https://t.co/gxHjMQhqw4

Sure hope this is good news for #BachelorNation ! According to Martin Hilton the man in question is nothing like the guy “these women have made him out to be.”

Don’t worry, #BachelorNation . @Millsy11374 and Martin Hilton are conducting a thorough investigation. No stone will be left unturned.


Exclusive: #BachelorNation's Becca Tilley is head over heels for girlfriend Hayley Kiyoko and she’s ready for everyone to know it. https://t.co/EuIIlbfACF

Exclusive: As #BachelorNation — and Susie Evans — continue to reel over the Clayton Echard shade during the premiere of #TheBachelorette, Gabby Windey and Rachel Recchia are sharing their sides of the story.

#BachelorNation's Tayshia Adams weighed in on pal Michelle Young’s split from Nayte Olukoya — and revealed whether she saw it coming. https://t.co/LYUHnOKEJv 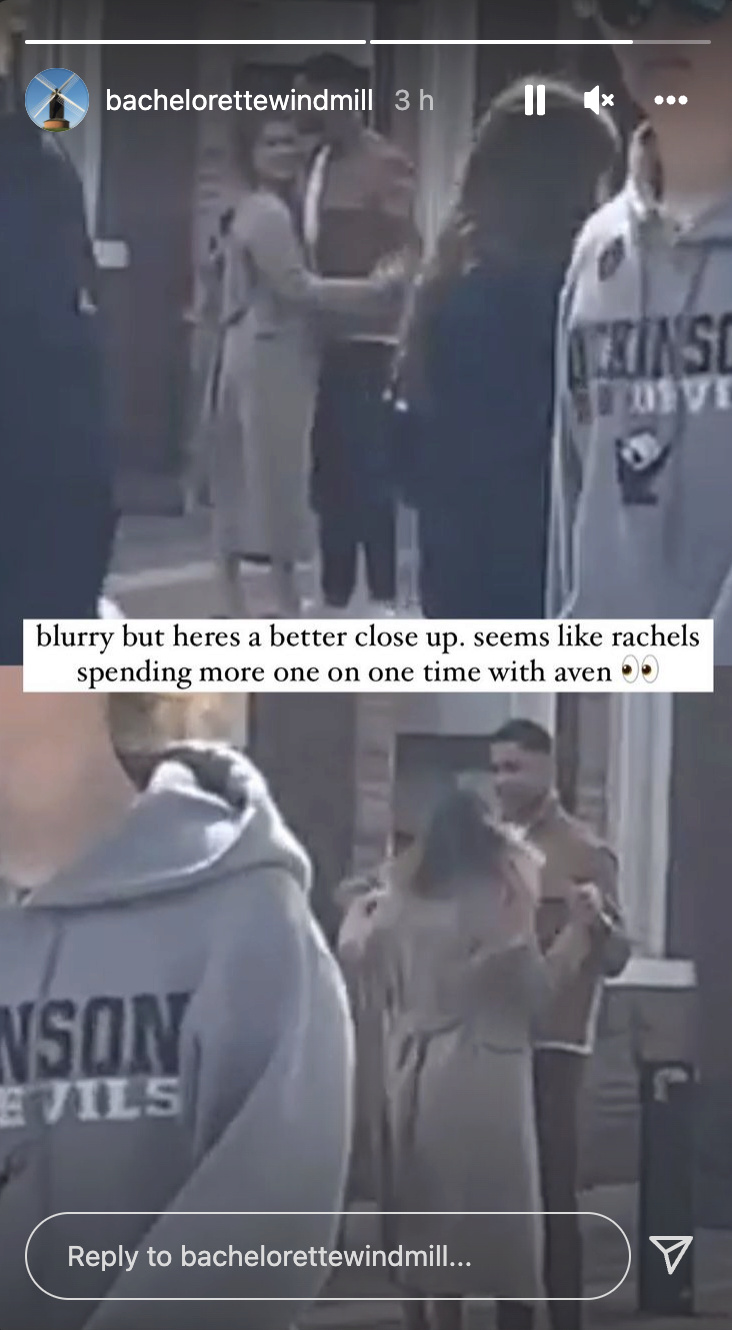 (SPOILER VIDEO): Rachel on a hometown date with Aven Jones, taking a horse carriage ride in Salem, MA to Crow Haven Corner, which is some sort of witch store. pic.twitter.com/KF77c7q1yj


(VIDEO): Rachel and Aven outside of Finz. pic.twitter.com/xBnyjcqlPb

she always seems to be laughing with him

(HOMETOWN SPOILER): Pics are blurry, but confirmation that Gabby is filming a hometown date in Bedminster, NJ today with Erich Schwer. They were at Natirar Park earlier and now at his family’s house. pic.twitter.com/X265buK434

smg2587 wrote:Yay a Gabby spoiler. I don’t know why but he looks better in that blurry photo to me compared to his cast photo. Jmo.

Oh bachelorettewindmills Instagram has video of them walking and near a bikes. They also have a separate video in their stories.

smg2587 wrote:Bachelorwhatever Instagram confirmed with Tino’s best friend that he does have a HTD and it’s on Friday. So it probably with Rachel. They posted this info on Reddit. Here is the post she made on IG. 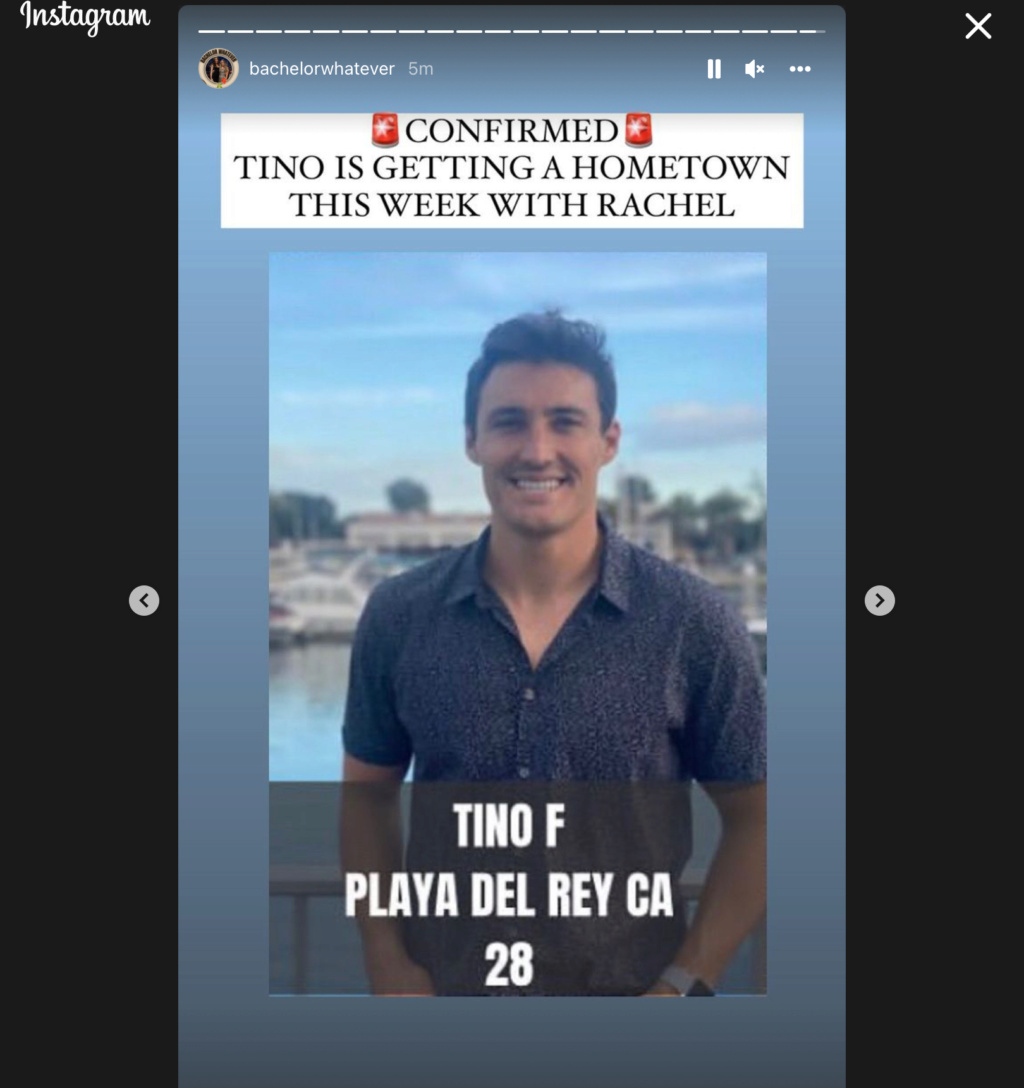 smg2587 wrote:Tyler with a producer on his way to the spot where he is meeting Rachel.

Someone on Reddit posted a live stream of where Rachel and Tyler meet up that was at the Wildwood sign. I only saw it when Rachel got there. She did the hug jump and they walked away and came back to refill part of the intro after the huju. It was from far away but she looked excited to see him. They seemed to be skipping both times after they filmed the exit. Edit someone on Reddit posted the video of it.

(SPOILER): More pics of Rachel & Tyler during their meet up pic.twitter.com/jWM7XdWS8Q

ariwolf wrote:wildwood boardwalk just posted a 9 minute video of tyler & rachel. i haven’t watched it yet so not sure if there’s any new footage or if it’s just all the videos they posted on instagram.

smg2587 wrote:Reporter got this 11 minute video of them at a basketball fair game includes a makeout session.

He says he has the two past days htds and got sent video but will reveal after he get confirmed who the rest of Gabby’s f4. He says no crossover between the  guys and G/R from what he knows.