@Bobette wrote:Todd currently the only viable option on Sportsbet's list of possible Leads IMO. Do we have a thread for Bach 19 yet, @AllAboutLove?

@LeapofFaith wrote:Ummmm why do they have Brooke as possible bachelor?? Bachelorette yes but bachelor???? Also I can’t see dr Chris brown doing it at all! He doesn’t need imo the extra publicity like the other previous celebs who probably needed a boost(also celeb Bach’s suck)-jmo please please please just let it be Todd!!!

Because Sbet don't take entertainment betting seriously at all

As long as they're not losing money on the winner the rest they just do for kicks IMO and to lure in punters who they hope will continue betting on other things.

Chris Brown flat out said on HYBPA that he couldn't imagine anything worse (paraphrasing) as he's a very private person so I very much doubt he'd do it and would be a fool to do so IMO when he already has so much going on.

TPTB would be equally foolish to pass up the opportunity to have Todd as a Lead so unless he doesn't want the job (which doesn't seem to be the case from what I've heard/read in interviews) then I think (hope) it will be him. 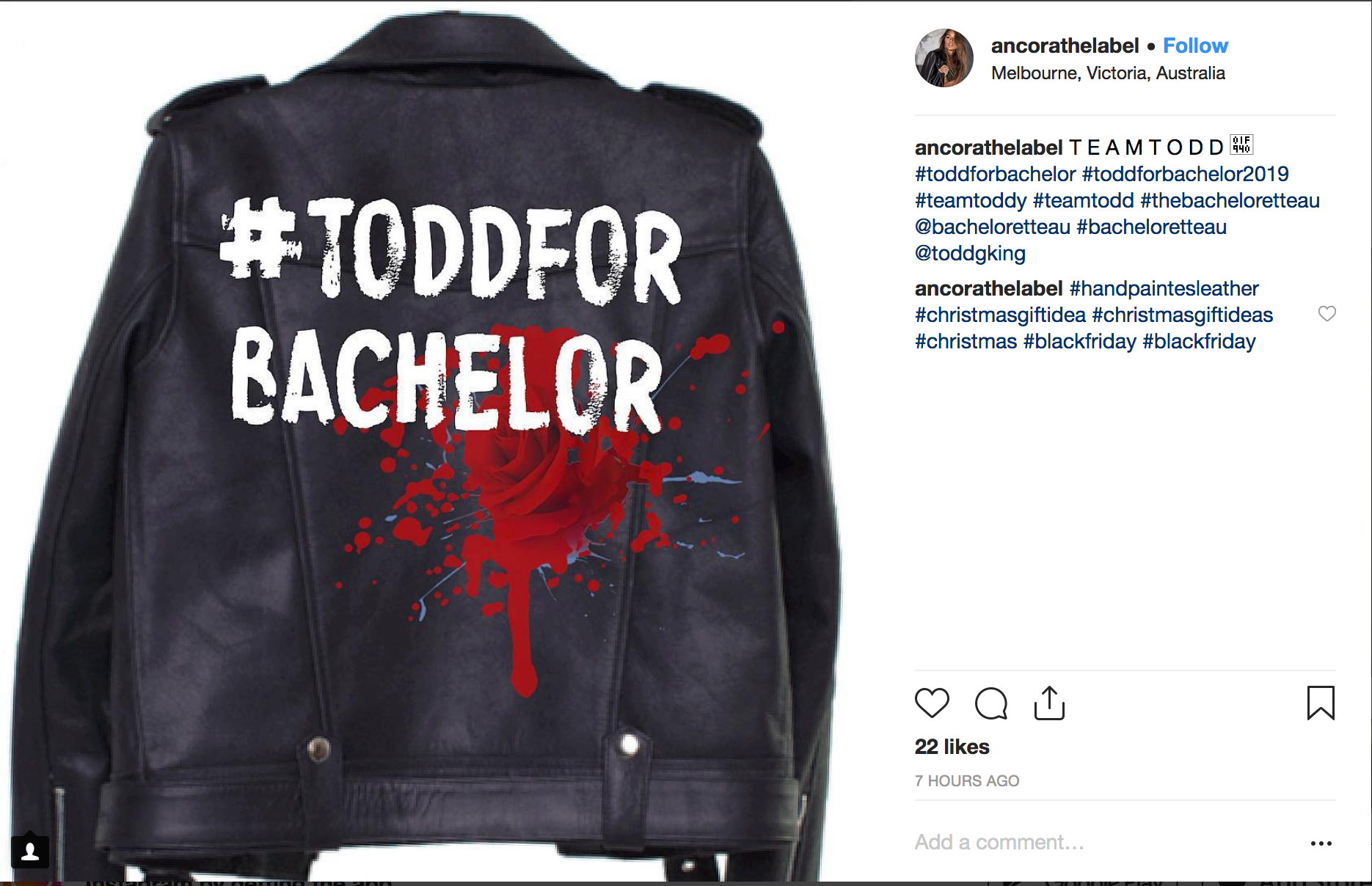 such a beautiful soul

toddgking Men feel & men cry.
I grew as a man on the show and I met individuals I'll hold dear to me for the rest of my life.
For those who have supported me and those who i love, you made this so much easier with your kindness. I am so thankful for this adventure and I have Warner Bros. and Channel 10 crew to thank. Thank you for encouraging me to be vulnerable again, to give everything I am. I'll be forever grateful for this journey.
Love is something worth fighting for, worth hurting for, worth sacrificing for - and I'll never regret putting my heart on the line in search of love. Because when you find it, it heals all wounds. I'll never stop searching

If that doesn't imply he'll be Next Lead I don't know what does!

@Bobette wrote:CHOO CHOO. All Aboard the train to Todd Town.

Todd steps out of the car...

Me: *starts application for The Bachelor 2019* #BacheloretteAU

Ladies running to audition for Todd’s season of the Bachelor like.. #BacheloretteAU pic.twitter.com/JL5CUdPJa3

Todd for bachelor. Todd for king of the universe. Todd for everything. #BacheloretteAU

me, signing up to the next season of the bachelor hoping to meet todd on the red carpet #BacheloretteAU pic.twitter.com/QsCqMQi3NF

I volunteer as tribute

We must find Todd the happiest ending.
What a champion.
An angel.
Precious cinnamon roll too good for this world.#BacheloretteAU

Hey Todd, all of #bacheloretteau single, thirsty twitter is ready and willing. pic.twitter.com/G9Z4JIjQbZ

I’m consoling myself in the knowledge that Todd is way way too good for her anyway. Taite is EXACTLY who she deserves. #BacheloretteAU

Please make Todd the next Bachelor . I’m not ok about him having his heart broken #BacheloretteAU

Man. Todd’s dick is about to become the most sought after genital in Australia #bacheloretteau


@Bobette wrote:cc @AllAboutLove. This sounds like Bach Speak to me. Giddyup.

The Bachelorette's Todd King: "I'll be the next Bachelor"

Australia has fallen in love with him, but has Ali?

Even if Ali doesn't fall for him, Australia has, which is why Todd King's already being touted as the next Bachelor!

"Oh, s---t. That's a good question," he laughs to NW when asked if he'd be up for another reality TV gig.

"To be honest, at the end of the day this whole experience has made me learn a lot about myself. I think you're always looking for love, and I think I'd exercise every option to find it. But I'm just a nothing from Geraldton in WA."

Speaking of nothing, Todd says he wouldn't be surprised if Ali pulls a Nick Cummins and walks away from the finale solo.

"I think it could always be a possibility. In the blink of an eye, things can go wrong, I mean we saw it with Charlie," says Todd, 26. "If I do make it to the final two and she doesn't want either of us, like Nick, it's completely fine by me.

"And if I'm not the guy at the end, then I'm happy that she's happy. I care about her that much, that if it isn't me at the end, then that's fine. I don't think Nick's deserved the scrutiny he's gotten either because at the end of the day he didn't find someone right for him and he stuck to that. He didn't just choose someone for the sake of it."

Todd also applauds Ali's decision to put her foot down and demand her man move to her if she finds love on the show.

"I think she deserves that. She deserves someone to sacrifice for her and to uproot their life to fit into hers because in her past she's always been the one to do that," he says.

"I think it's a commendable thing... and I'm willing to make the move for her if it turns out that way, too."

Thank you Todd and TPTB! This is all I asked for thank you forever and ever if this is so! I mean I thought so before the season started because let's be honest Nick was a DUD imo and after that I need someone who actually believes in this process a la MattyJ who believed in it. No doubt Todd's watched the show and seen exactly what went down and given a ton of clarity watching it back! Now TPTB just need to announce so I can sleuth his season and they better cast some amazing women and have a Laura for him like they did Matty J 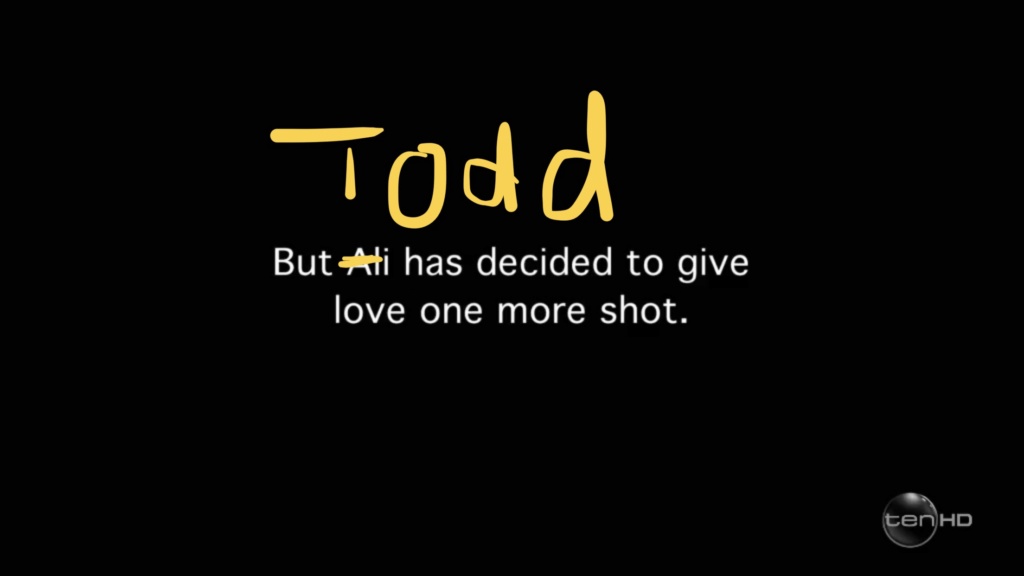 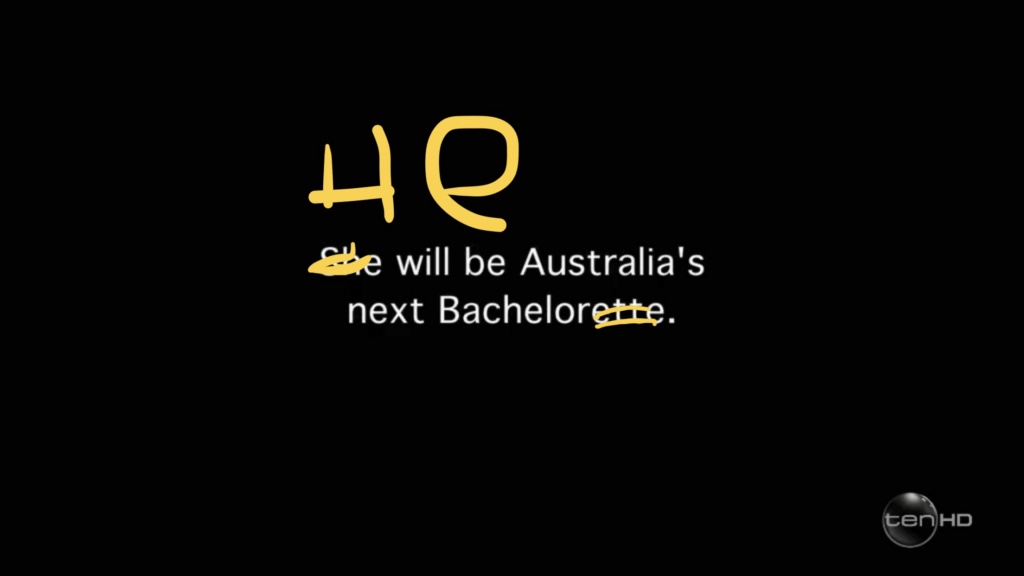 "I believe in the process" is the ultimate in Bach speak. He's totally doing it.

CHOO CHOO.  All Aboard the train to Todd Town.

*Doomsday end of the earth challenge*

Them: "What do you grab?"
Me: pic.twitter.com/QFbdSKNvBu

Todd for next Bachie please

Ali to Todd: Hello! Where have you been hiding?

Everyone: you blind or just can't see 10s? #bacheloretteau pic.twitter.com/CI5XBzNtKQ

Dear the producers of the bachelor,
...
If Todd doesn’t win Ali’s heart, no need to worry about advertising about a new bachelor.. Todd will do us just fine
...
Yours sincerely,
Australia. #BacheloretteAU

TODD IS THE REAL DISNEY PRINCE CHARMING THAT AUSTRALIA DESERVES. HE'S GENUINE AND TOO PURE FOR THIS WORLD  #BacheloretteAU #Toddforbachelor

I suspect they don't announce straight away since filming doesn't start for a few months. He'd have to go in hiding if he was announced too early

I can see them doing announcing in Feb or so. BIP aired end of March and they'd know he won't be on it as he will be doing press rounds while they film BIP in Nov so a very different timeline unlike Apollo or anyone else even as a later contestant it's not feasible. It's made so he can't be on BIP and audiences only chance to see him again is as the next lead. I am more than fine with that as chair (co-chair if you want to share) of the #Toddforbachelor committee