So I was rewatching the wedding and I was basically going 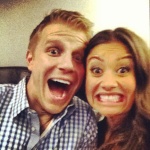 @ninu wrote:So I was rewatching the wedding and I was basically going

Assuming Harrison gets them all nice and liquored up.

Glad you enjoyed Molly and Jason's wedding! It was so sweet how Jason tears up about her. They're not very affectionate in public from what I've seen but it's obvious how much they feel for each. I loved watching it but I think Ali's is going to be about one hundred times cuter, but I may be biased. :laughingoutlou

@ninu wrote:So I was rewatching the wedding and I was basically going

Assuming Harrison gets them all nice and liquored up.

Glad you enjoyed Molly and Jason's wedding! It was so sweet how Jason tears up about her. They're not very affectionate in public from what I've seen but it's obvious how much they feel for each. I loved watching it but I think Ali's is going to be about one hundred times cuter, but I may be biased. :laughingoutlou

Aww the wedding was beautiful! I loved it when Jason tears up when he sees her and as she walked toward him. They are so cute!

Now I'm excited for an Aliberto wedding! Please Ali & Roberto televise your wedding for your fans!! k, Thanks!

http://twitpic.com/57323h - Enjoying the afternoon with some beers and appetizers

I think Molly is so pretty. I love her nail polish color.

jason_mesnick
My little guy is toothless! http://yfrog.com/kigyvitj
3 minutes ago via TweetDeck