Hope he's followed her by now! 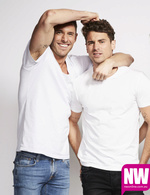 Hope he's followed her by now!

@bellehuntley wrote:Beautiful video Lost! Also someone needs to make a video to 'My Girl' now because Ben said it was their song!

When did Ben say this was there song?

Oh my gosh, so natural- its like they've known each other forever, but are still finding out little gems about each other along the way. I love how they tease each other and crack each other up! She likes to get a rise out of him. But, he knows she loves him truly, madly, deeply and that's probably why she pushes his buttons. I loved when he said, "You can't just use the shampoo to wash your face?" Such a guy thing (although, actually not my guy). She really doesn't like his loud breathing (fourth time I heard her say that). Maybe she'll get used to it and it won't be such a pet peeve. The more I get used to my husband's quirks, the less they bother me. But, he can't help how he breathes. That's the only thing. Perhaps its now an inside joke between them. If it really bothered him, I'm sure he'd tell her, and she'd stop talking about it. She strikes me as someone who would be respectful and sensitive. The IG follow request from her was a fun move. That's why she's "dang it, you're cute" in his eyes. Very playful couple. The couple that plays together, stays together!

I wonder what the secret date was last night and if they'll share about it?
Thanks for posting all these finds and all your hard work/videos!

HEART EYES. Love how she "awws" at him- he seems like a romantic. She seems like someone who would appreciate being wooed.