Our Charlie will never see snow

He hates the rain because it ruins his playtime and doesn't like getting wet. Have to take him outside to do his business when it's sprinkling or finally stops. Basically like that dog up there looking out the window.

heaven forbid they get their paws wet. Louie will walk around or jump over a puddle.

@GuardianAngel Ozzie was the same way! I was grateful because at the dog park it can get muddy in spots and while other dogs would be gleefully romping through that, he was as far away from it as he could get.

he even knows enough to walk around a little icy patch on the sidewalk.

He took after me. Hate winter!

Amazing work by a lot of caring people!

My boy does the same thing.

He never misses smelling a shrub or flowers on walks. So cute.

This is Finn. Someone once told him to stop and smell the flowers. Now he never skips a day. 13/10 pic.twitter.com/YN1SI8R3bp

Look who is back...poor Tinkerbelle. I had fostered this poor 10 year old girl after her original owner surrendered her because of her failing health. She was with me for a bit before getting adopted before Christmas of 2020 and I was so happy for her. Turns out the new owner is now having some issues and returned her.  Best place was with me since she had been here before and was familiar with all of us. Not happy about everyone, but familiar. She is sweet. I feel so bad for her because I can see she is more withdrawn than she was last time. She doesn't understand WTH is going on and why she is being bounced around so much. We have to be really careful about who she goes to next time, because after everything she really needs a quiet home, preferably without other animals. She gets along with mine...well tolerates my poor deaf, 19 year old Macy, who most of the time doesn't even realize that she is being hissed at...but, I am patient and don't force her. Most people don't give enough time for an animal to adjust. (I got Macy when she was 6 and it took almost a year for her to let me pet her.) Winston just ignores her unless she gets in his space and then barks. She really loves to cuddle and be brushed, but she is much more guarded this time around.

I had a potential adopter come a few days ago, but it was a no go. It is much harder to get a cat adopted now since we are not doing our monthly adoption events because of Covid and those dumb a**es who adopted pets during Covid are now returning animals because they aren't convenient any more. Ugh. 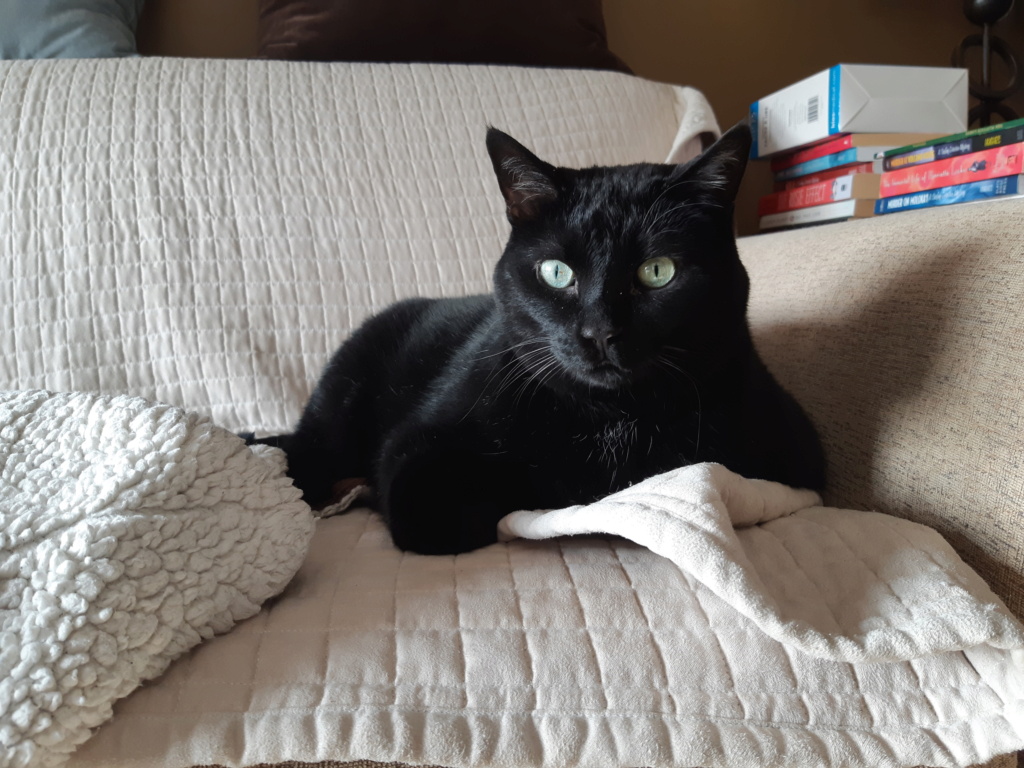 Awww I'm so sorry to hear that but happy that she is with you and not yet another strange home. She is beautiful and looks quite comfy.

COVID adoptions infuriate me. It's a selfish act, and worse yet when they just think it's ok to return the pet.

@Sprite Poor baby! Hopefully she will find another forever home soon. Would you be open to adopting her or are you only fostering?

We adopted Charlie about a year ago on the 31st so that's a COVID adoption and it is the best thing ever.

Now we can't even imagine our lives without him.

@Linds911 Ideally I would like to find her a new home. She tolerates my dog, but not so much my cat. They didn't have issues last time, but I think because Macy has lost her hearing now and doesn't hear Tinker any more, it is confusing her and they are not friendly. It means she spends more time upstairs on her own rather than with us...although she will come and cuddle sometimes. Plus, three really is a lot. The amount of hair is crazy. I think because she is stressed she is shedding even more. I have started using the Furminator on her and that seems to be helping, but it will take a bit.