Kevin & Astrid are back from Bali, they did an interview on The Morning Toast.

. They said they're travelling a lot the next few months, Kevin has some more active escapes trips planned that Astrid will be going on with him & they're going skiing with Colton in December and she wants to wait out the Canadian winter a little

, but their timeline definitely moved up from a year.

Kevin says he's never felt this way about anyone else. Confirms that he actually had a convo with Astrid on day one about him always chasing women and making all the effort so the things we pointed out that Astrid did, like being the one to say ily first, was on purpose.

They're both actually glad it happened the way they did because they get to be in a relationship without the pressure of an engagement. They spoke to each other the day the left, Kevin dm-ed her on IG right after and Bibi had to let her know because they weren't following each other so the dm was in her hidden section. They just checked in to make sure the other was ok but Astrid needed a day before they could get into everything that happened. She talked to him first before anyone else because she wanted to hear his side before friends weighed in and gave their opinions.

They hadn't spoken or knew each other before paradise but Astrid & Bibi became friends on IG and Bibi dm-ed them both individually about the other saying she thinks they'd be a good match.

They were asked about editing, neither had any complaints but Kevin did mention that the line about him potentially marrying Ashley was actually about Jasmine.

Re Jenna: Astrid was clueless in paradise about her maybe not having the best intentions but Kevin always felt there was something off and would say things to Astrid about it because he was close with Benoit and he would hear about the things she was saying to Benoit and it didn't match up with things she would say to Jordan.

@ReneeM Thank you. Pretty much aligns with what I had been thinking...particularly that bit about editing the marriage line to be about Ashley when we thought is was about Jasmine.

It will be interesting to see if this is the first cross border relationship that works out. They both seem pretty grounded, so I actually have positive vibes about them.

I am happy for Kevin and Astrid -- I hope they can go the distance and have a bright future together. Glad they are so happy. I also thought that line Kevin said about getting married was about Jasmine not Ashley -- it was just edited to look like it.

I think it is interesting that Kevin always thought that there was something off about Jenna. I felt that way as well. I wanted to be wrong about this just because Jordan was so mesmerized by her. I did not like her behavior with Jordan or Benoit, either. IMO.

I had read at the time that the line had been edited. He has been very vocal about that from the beginning.

As for Astrid, I believe I found out when doing a little digging about her that she is actually a German citizen but has a green card to live and work in the USA.

@ReneeM Thanks for bringing that all over!! Yes, you called it on the timeline!

I never doubted whenever Kevin spoke about his former relationship it was about Jasmine. I know first hand that he had a very difficult time for several months. There is no comparison between the two relationships IMHO.

I don't blame Astrid for holding out on a Canadian winter!

She doesn't really live that far, so that's a plus. With Kevin's hours and time off in between shifts he can even, drive no problem and maybe drive back with Astrid doing a little road trip and she can fly back. Hey Kevin, fly Frontier out of Buffalo, for less than $100!

Astrid seem so grounded so level headed and appeared to be really hurt after BIP. What does she do for work?

I like that Kevin knew something was off with Jenna. He's known Benoit since Jasmine's season, and it sounds like Benoit was confiding in him.

Astrid lives in Florida. Might be a short plane ride but not a short drive!

Congrats to Kevin on his team the NYY winning the AL WC last night against Oakland.

I'm glad things are working out so well for them. I'm with Kevin on Jenna. I never felt she was into Jordan or any of the other guys.

I guess being Canadian, I don't think twice about driving south!

I'm curious to see how they'll make this work with the distance, although plenty of other couples were in the same situation and are happily together or even married.

Maybe someone just gave them those hats? I'm always anyone but the Yankees.

@GuardianAngel He's not a yankees fan. They did an interview with chicks in the office today and he mentioned that people were giving him grief over the different team hats he always wears, he said he just loves hats and has one for pretty much every baseball team, they went to a Yankees game, so they wore Yankees hats. The only sport he won't wear another team's hat is football. He'll only ever wear a Patriots hat.

Did you noticed he tagged Astrid’s name over his heart ? 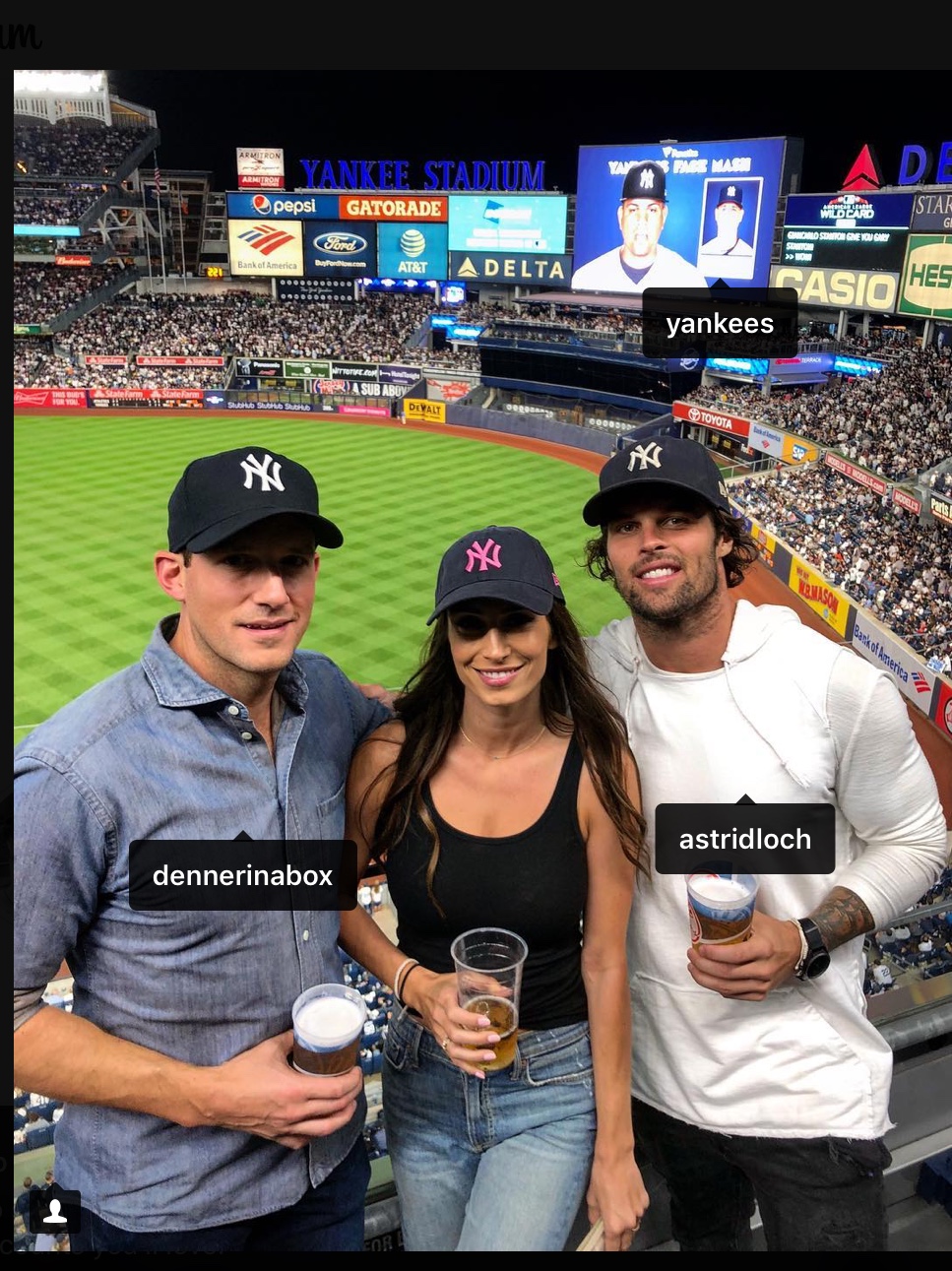