@Aunties_Love I feel for you facing the fear and uncertainty of forest fires. I hope people will listen to your plea to stay away.

I live in wine country and am all too familiar with the reality of fires. After 2017, when fires devastated both Napa and Sonoma counties, the counties began pre-emptive evacuations, based upon fire modeling from CalFire that suggested a likely path. In 2019, half of Sonoma County was under emergency evacuation. (250,000 residents). In 2020, Napa county was on fire and more than half of that county (70,000 residents) were evacuated. By declaring emergency evacuations, everyone has to leave - residents, tourists and lookey loos. Anyone going into a mandatory evacuation zone has to have a permit. The authorities evacuated far more people than were in danger of harm or losing their homes. But by getting people out of harms way, the firefighters can better focus on actually fighting the fires. It makes you mad to have your life upended so much but it far better to be mad than to lose your home or loved ones.

In 2017, a family had rented an AirBnB in Sonoma County so they only had cell phones with poor service in the area. They were unaware of the danger around them. The adult children had left on Sunday night to return home for work and the parents stayed for a couple extra days. The fire came over the mountains from Napa County into Sonoma County and the only solution was to jump in the home's pool. It was cold and they stayed in the pool for hours - the woman succumbed to smoke inhalation and hypothermia but the man survived - with a horrible story to tell. As a result, I cannot stay in a rental home in an unfamiliar area.

One thing I have learned is to always be prepared - have your car parked for easy access and headed in the direction of an exit. Store water in your home, along with batteries, portable radio and food for you and pets. We lost cell and internet service, along with electricity (means no water as we are on a well) and plumbing (need water to flush toilets for septic). It really is easier to evacuate than to try to live under those circumstances.

It's a horrible situation with so many people on alert ready to evacuate or already have. I can't imagine the stress and the worry about loosing your home in most cases you've worked all your life for.

I have been keeping updated on all the forest fires. Even though BC is so far away from Ontario, it's heartbreaking to see the images. Ontario also has been fighting forest fires with over 150 active fires in Northern Ontario. Some 1900 km's away the air quality is being affected as far as Toronto. I can't imagine living closer to the active fires and how bad the air would be.

I also read somewhere the challenges of keeping tourists away. I can't understand that mentality. You may be getting in the way of desperate services that are needed.

Hoping for the safety of all firefighters and everyone battling the fires. A big thank you to all those coming from different countries to assist.

Us on the island have had a few fires nearby but they were put out quite quickly. On the south mainland especially the Okanagan, Kootenay and Thompson/Nicola valleys, they haven't been so lucky. The fires there have been epic this year especially with the heatwaves we have had. Our temps and duration are unheard of as our area has broken historic records over and over. Successive days here on the island we have been over 100 farenheight. In the summer here on the island we normally get around 85. We have now been 51 days without rain.....something that doesn't happen in our "rain forest" environment here, not to mention that in summers in the past, we have a few days of heat then we have some cool down days.....this year that hasn't happened.

GA - you wrote: I also read somewhere the challenges of keeping tourists away. I can't understand that mentality. You may be getting in the way of desperate services that are needed.

On the road, my DH used to call them rubber=neckers. Try to make progress when you see a car pulled over by a policeman, or an accident. People on the road stop to look, not only impeding rescue vehicles, etc. but also making everyone behind them slow down. Eventually there is a back-up of enormous proportions, and everyone is annoyed, short-tempered, etc.

@Aunties_Love stay safe. It's so sad reading all the fires everyday. The lack of rain doesn't help.

yes, that's what I call them too.

GuardianAngel wrote:@Aunties_Love stay safe. It's so sad reading all the fires everyday. The lack of rain doesn't help.

yes, that's what I call them too.

Thanks GA.  What was a bad situation there blew up yesterday.....  a few major highways in the province closed for fires.  4 fires started yesterday in populated areas.  The main largest fire has burnt through 5 communities although not all homes were lost.  There are a lot of communities/cities on evacuation alert/orders including parts of Kelowna, Vernon, Kamloops and others.  We had bad fires in 2017/18 but I have to say that this is the worse forest fires for communities and buildings lost since 2003.  we are on our 58th day now with no measurable rain.  I actually saw some drops of rain on the windshield today but not enough to wet it.  Kelowna and Vernon had a bit more but no where near what we need to make a measurable difference with these damn fires.  with the weather comes the wind and dry lightening in some cases which is something we could really do without

@Aunties_Love That is frightening. I pray you get some good rain. Stay safe.

@Aunties_Love Those pictures speak a thousand words. Frightening. I hope you get productive rain storms without lightening. Just hoping for the least property loss and no loss of life. Firefighters are very brave people.

I love this picture - so much respect and those goldens are a such a pretty sight for the tired firefighters! 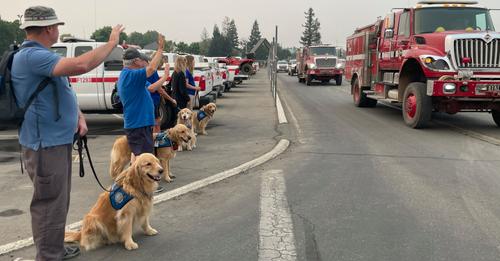 @Aunties_Love it's a horrible situation. I hope somehow a lot of rain comes down. It's heartbreaking to see what's going on with all the fires.

@Norcalgal great article. I love those goldens. They are so precious and bring joy to so many.

The tally's are in from the firestorm that raged through from the whiterock lake fire between kelowna, vernon and kamloops in that kind of triangle belt. Less than 5 mm of rain fell. 223 lightening strikes in that same area....75 homes severely damaged and maybe never usable, 16 homes and 2 businesses completely destroyed, then on native bandlands, another 10 homes destroyed and 4 businesses.

cooler temps have helped but tomorrow, temps to increase along with major wind again.

Right now there are 86 evacuation orders covering 8,262 properties, and 125 evacuation alerts coering some 22, 729 properties with 262 wildfires burning in the province.

I am probably going to the Okanagan next week to help my family hopscotch the wildfires....I did this a few years back as there are always more vehicles to move around when you get moving trucks involved. Will wait to see what's up.

@Aunties_Love thank you for the updates. I didn't realize there were that many evacuation orders. It's always best to follow the evacuation orders, as heartbreaking as that is. Not knowing if you'll come back to your home must be so stressful.

To everyone involved in so many area's of the world, I hope people are safe and I can't say enough prayers for those f/f battling the blazes.

Peppermom wrote:Been off the site for quite a while.  Life interrupted.  Glad to see so many familiar names are still here.  I hope everyone is doing well.  Thanks to all the Admin and moderators do to keep this site alive.  It was really nice to see I could still sign in and participate!  Happy 2022 to everyone!