From what I've read on other forums, it was filmed ages ago and is expected to be a train wreck so people weren't even sure it would be aired (I guess Ch 7 is desperate to fill their schedule with so many other shows/sports cancelled).

Will anyone here be watching?  Would it be worth setting up a thread?  I'll probably watch but not sure how much I'll have to say. 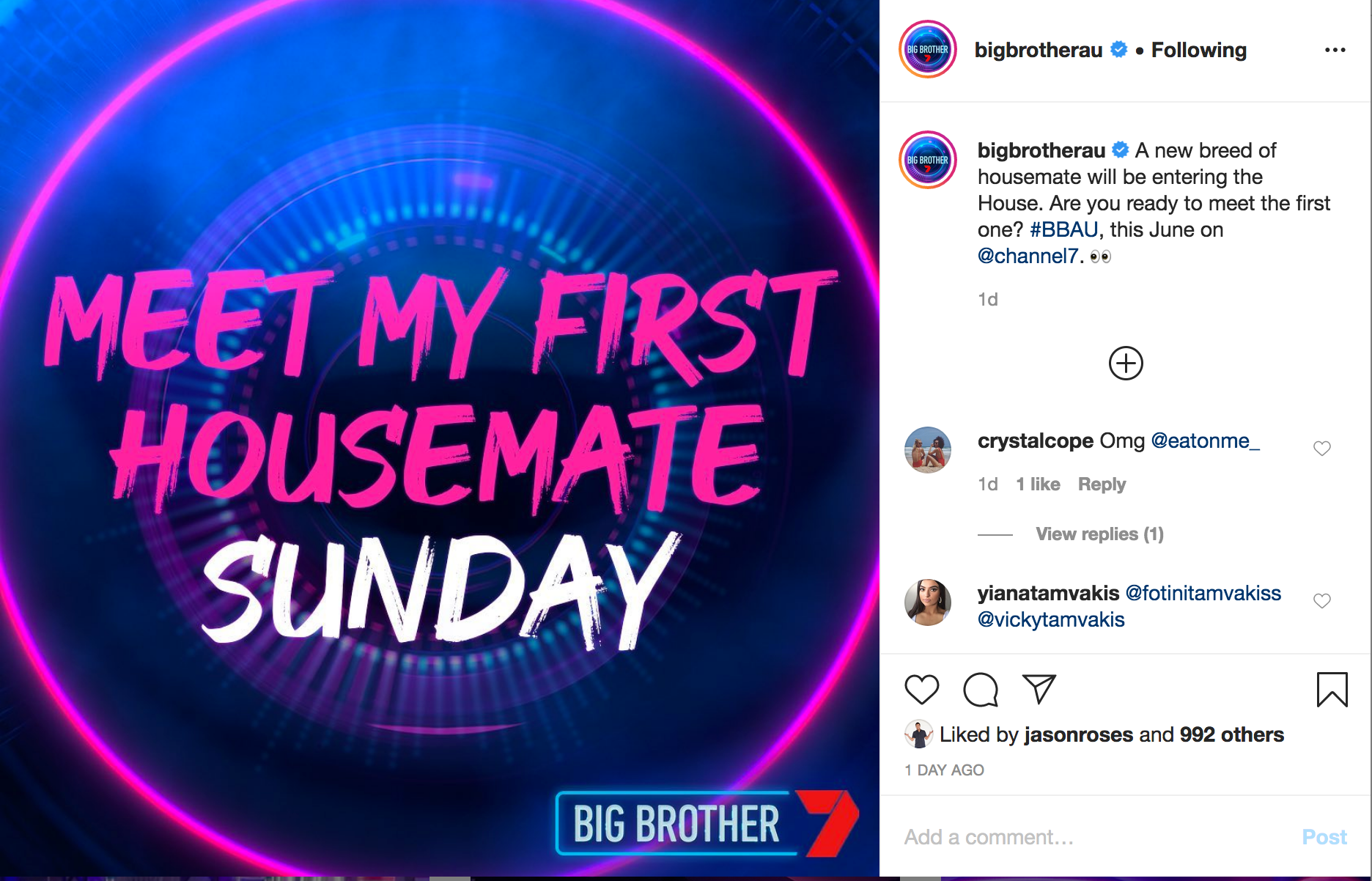 Noting for the record:

Sprite wrote:They tape it in advance? I always thought it always aired live. Don't people get to watch what is going on inside the house live? That is the way it is done on the Canadian and US versions.

In the past, yes. Not this season which is returning after an extended break (of years). And all the rumours from the set are that it's a hot mess. I guess it remains to be seen if its the good kind of hot mess or the bad kind.

I might give it a try but if it's bad I'll bow out with no remorse.

Bobette wrote:Yeah the original BB series was the best because it wasn't really "produced" - they just literally filmed/streamed the house 24/7.  It meant some stuff made it to air that should probably have been censored but that was the appeal IMO.

I'm intrigued to see what they've done with this season but knowing it was filmed in advance already takes the shine off for me - I'd be reluctant to even call it Big Brother... seems like a completely different (and less appealing) concept.

Oh it's Matt from Think Tank!  My love for BB wore off years ago, so I won't be watching, but Matt is

Urrrghhhh seriously, a "mommy blogger"?  I can't stand her already!

After Daily Mail Australia recently revealed sports star Daniel George is set to appear on the show, mummy blogger Zoe George has now been named as a contestant. 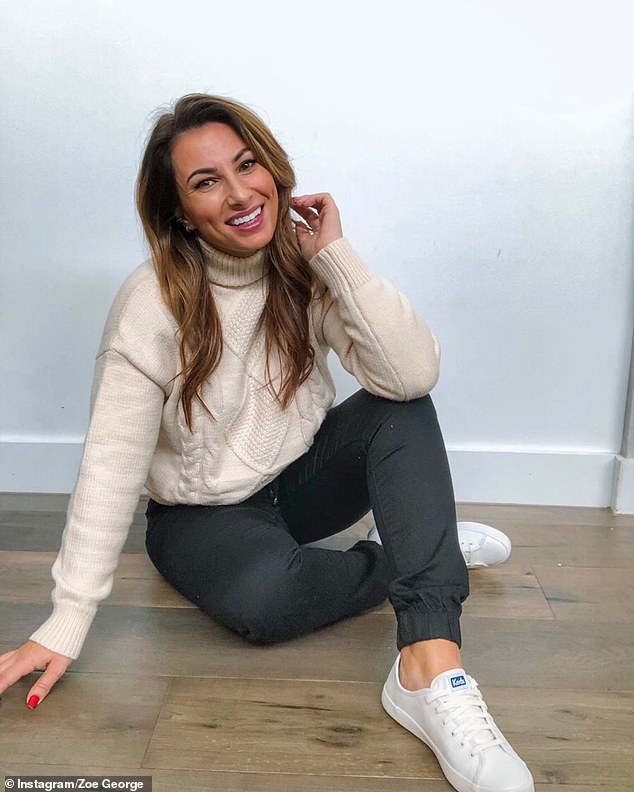 The brunette describes herself as someone who 'loves talking about all the taboo subjects that come with motherhood and being a wife'.

And so far as careers go, "AFL player-turned-influence" isn't much better. 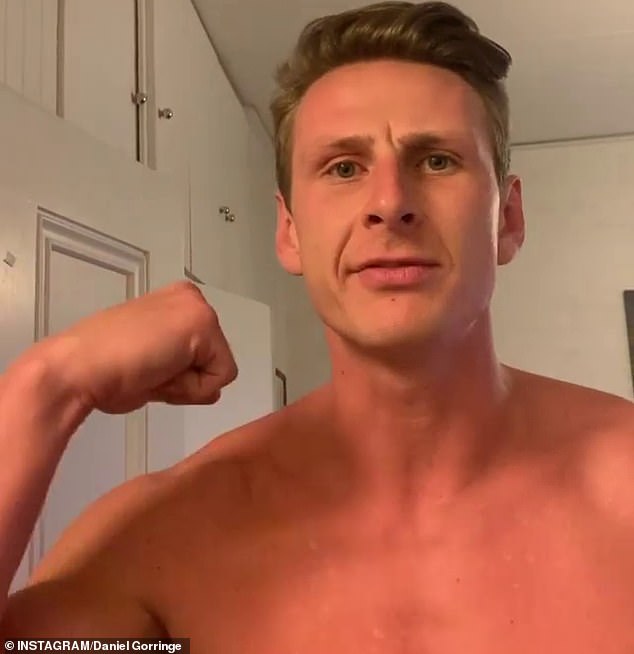 The sports star previously played for the Gold Coast Suns and Carlton Football Club, before retiring and focusing his efforts on entertaining people on Instagram.

He seemingly confirmed his appearance by failing to share a single post between February 5 and April 8 - which was when the show was pre-recorded.

This quote is noteworthy since it means Sportsbet don't know for sure yet who wins (though they probably know the finalists IMO).

The entire season was pre-recorded in Sydney earlier this year, except for the finale, which will be the only live episode with a public vote.

So everyone on the show will get to watch the show and then vote? That doesn't sound right to me. They will hear the things people say about them in ITMs which could skew the results. I don't like that. It makes it more likely there could be a bitter jury.

Looked up their IGs out of sheer boredom.

Fancies himself as a comedian, apparently.

I find this type of woman incredibly annoying.

But he's either deleted his account or changed his name.

Same old challenges and a disappointing cast, but Producers hope they can pull a rabbit out of the hat and make the new series of BIG BROTHER the compelling show we all want it to be.

TV Blackbox can reveal the new series of Big Brother wrapped production yesterday after a frantic couple of weeks of filming. After production was shut down for 48 hours due to a COVID-19 scare, shooting was accelerated so that the series could be completed without being shut down again.

As we already revealed, producers have been bitterly disappointed with the cast, who appeared great on paper but not make great talent when the cameras were rolling.

Endemol Shine Australia (the production company) is working overtime to make the show more engaging. This comes after an eviction was not recorded and had to be restaged.

Until then, Endemol Shine Australia are using every trick to being out the very best of the footage shot and create a compelling and funny storyline.

Endemol Shine were adamant a new Australian version of Big Brother would involve a new format before they would sell it to any local broadcaster. Their plan was to use this market as a test case for the rest of the world in order to evolve the ageing format.

The changes appealed to Seven who were after a big reality format. Nine had first right of refusal but didn’t have any place in its schedule for the approx $20million production.

The new series has been sold as “the game has changed” but we can reveal one of the oldest games has made a comeback in this format. the YES/NO game has been a staple of many iterations of the show and will also form part of the 2020 edition.

While usually a home run, executives are concerned the YES/NO game did not generate the usual humour seen previously. This was the first red flag for producers who realised the casting wasn’t quite right.

True to their word, the series has finished without the announcement of the winner. Two people are left in the finale which is planned to be broadcast live to allow viewers to vote for the ultimate victor.

Seven has not announced an on air date yet.

I have always loved Australian Big Brother, mainly because they stayed close to the original format. I hope they didn't change this to much. I will give it a try. 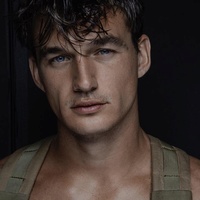 Sounds like it's going to be really bad. I guess if it's good it's because the story and editing teams do a really good job. The cast seem very meh.

The phrase "trying to make a silk purse out of a pigs ear" springs to mind.

I guess they could pull something together if they have at least 1-2 contestants with personality but so far like you @leavers I am meh.

The recent Bach/ette seasons would have been complete fizzers if not for a few stand out characters IMO (looking at you Timm, Ciarran and Abbie) who gave the editors a tonne of material to work with, so it is possible...

But considering Timm, Ciarran and Abbie were all released via SM pre-season, in the same way these three have been, my hopes are not high that there's some outstanding superstar being saved for a later reveal.

That's another thing that annoys me about this pre-filmed format: there might be some random who would have really resonated with the audience but if the editors/producers deem them boring we won't see them.

Bobette wrote:The phrase "trying to make a silk purse out of a pigs ear" springs to mind.

I guess they could pull something together if they have at least 1-2 contestants with personality but so far like you @leavers I am meh.

The recent Bach/ette seasons would have been complete fizzers if not for a few stand out characters IMO (looking at you Timm, Ciarran and Abbie) who gave the editors a tonne of material to work with, so it is possible...

But considering Timm, Ciarran and Abbie were all released via SM pre-season, in the same way these three have been, my hopes are not high that there's some outstanding superstar being saved for a later reveal.

That's another thing that annoys me about this pre-filmed format: there might be some random who would have really resonated with the audience but if the editors/producers deem them boring we won't see them.

Agreed, if these are the best of the bunch then it's going to be woefully bad

Key points:
- There are 20 housemates
- It was filmed in 5 weeks
- Premieres mid-April
- Someone is yet to be revealed who will be recognisable (read: z-grade reality TV persona or washed up sportsperson IMO)
- One contestant is over 60

I remain unenthused.  Give us someone spicy please.  Or at least hot.  I'll settle for hot.

Another contestant.  This one gives me Mary (Bach Matt) vibes. 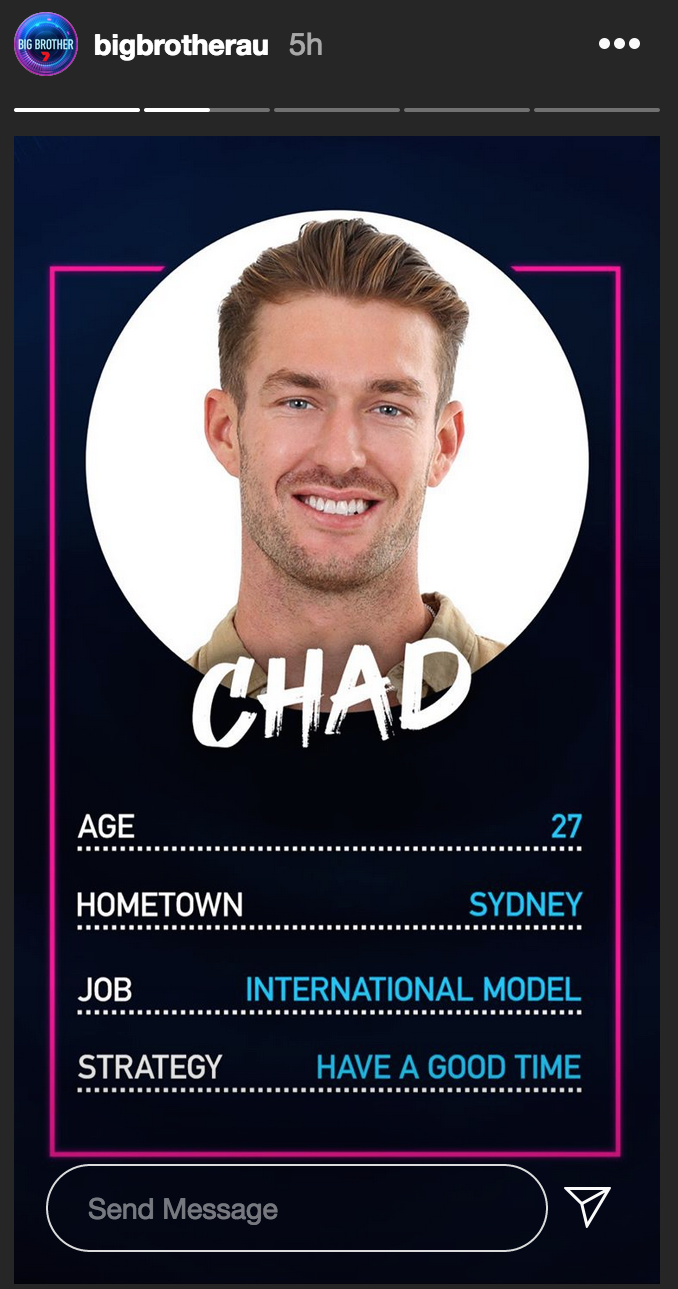 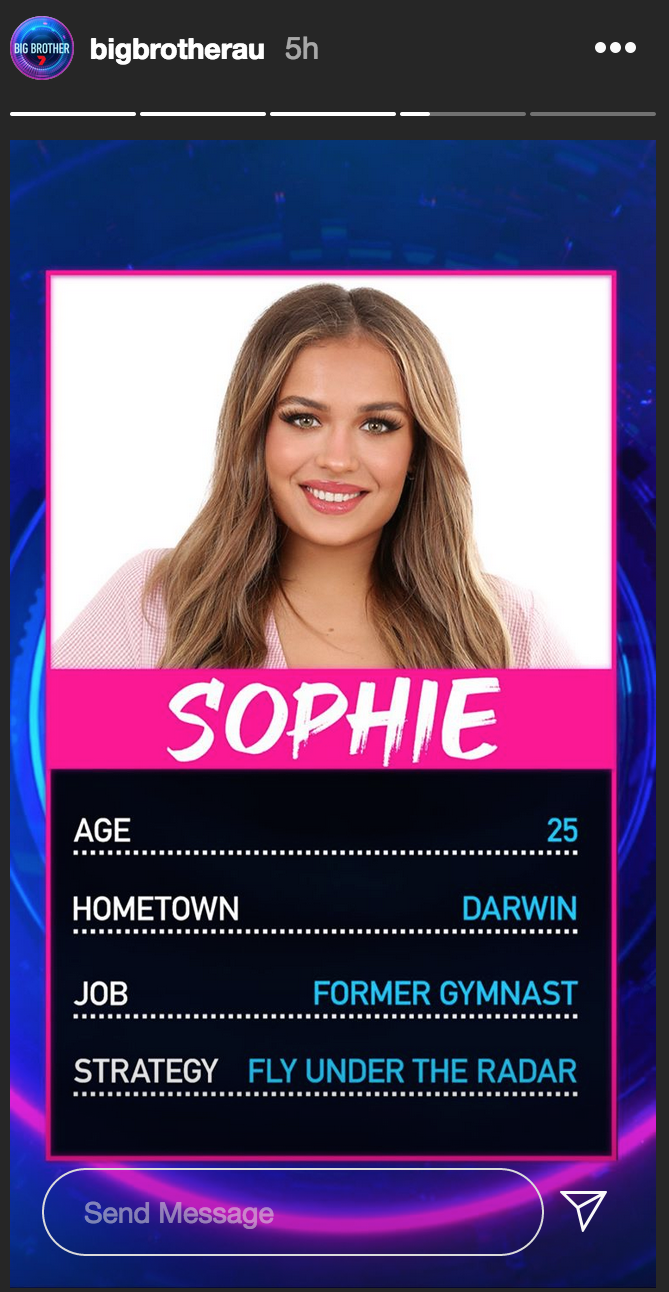 The winner is apparently going to be revealed at the live finale but the finalists would already be known and from the look of these odds I'd say it's almost certain they are both males aged 25-30, one from Vic and one from NSW (or both NSW).  TAB partnered with Ch 10 last year (took over from Sportsbet) and would have been fed insider info just like they are for Bach IMO.

ETA: Another contestant.  I am not excited about meeting any of these people TBH. 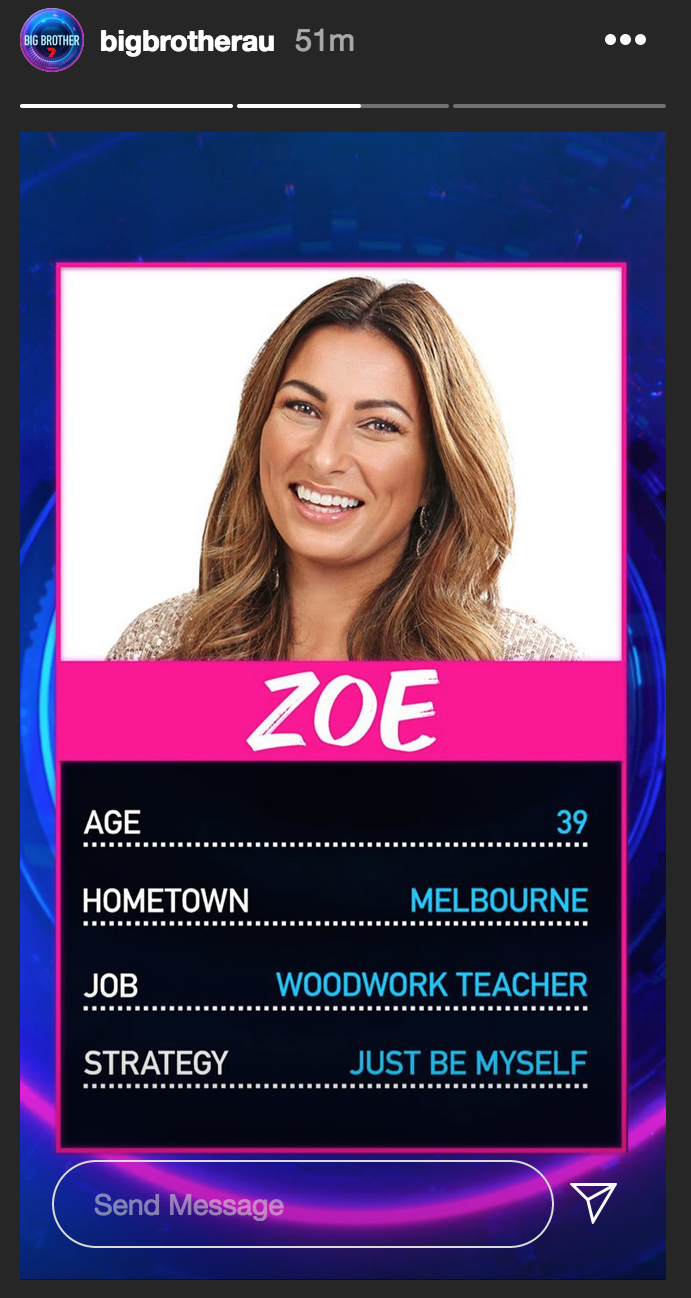 23/05 One more. No idea who this guy is but loads of people recognising him in the comments. 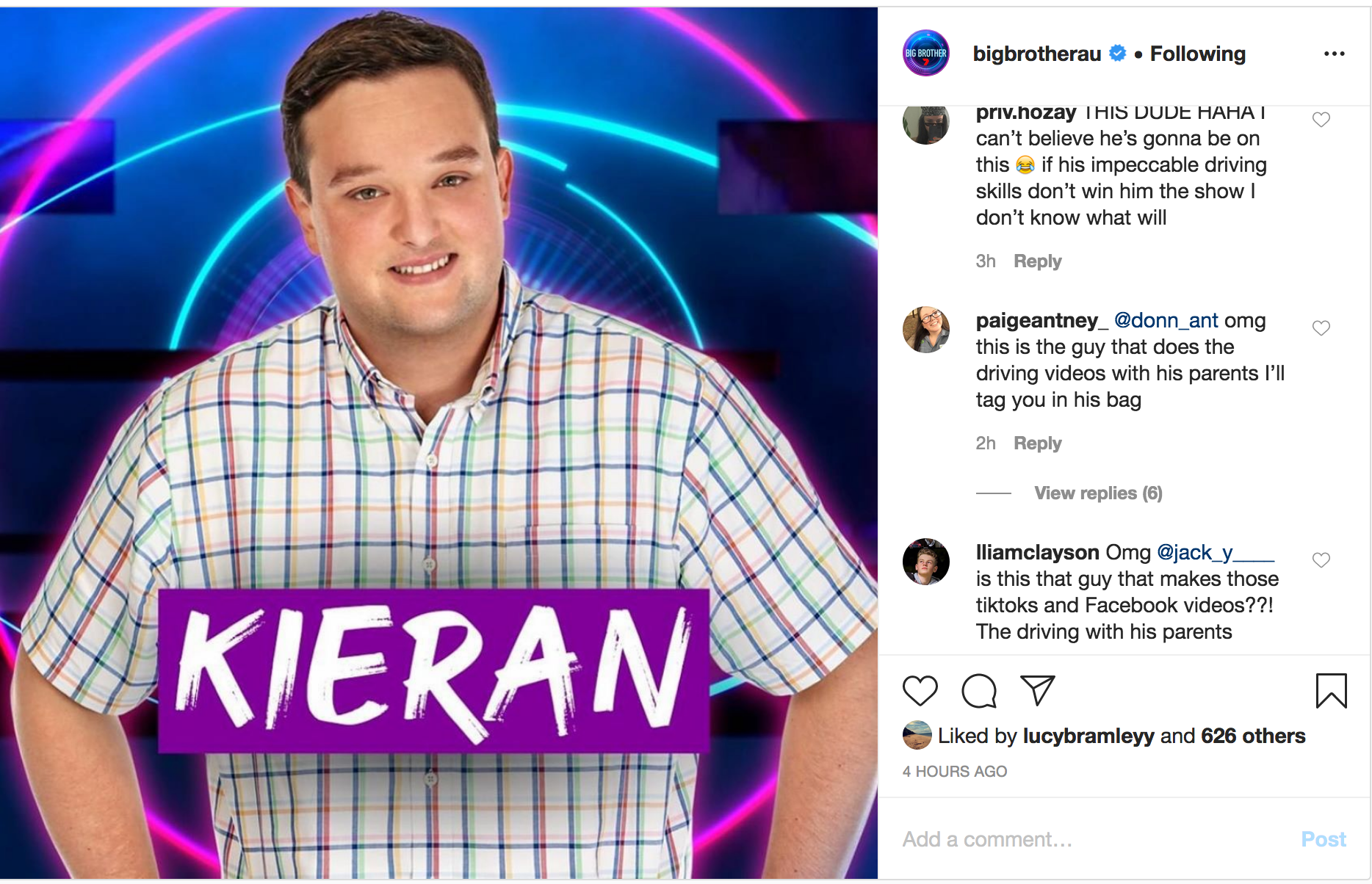