As you can see Ksenia is back in town and there is more stuff happening.

In the video you can see how they recorded a new advert for Snickers and how after that Ksenia and Sasha are playfully teasing each other. That is their kind of thing to do. And Ksenia`s best friend is backing Sasha up. Lera (the name of her girlfriend) wrote in her IG story "that is how you are falling in the back of your best girlfriend". It was in the morning yesterday.
After that Sasha and Andrej were at a barbecue of their friend. Sasha stayed not long and by the evening he was back at Ksenia`s best friend place. There were in total three couples. They tried to bake a Kulich. What is a Kulich? It is eastern this weekend for orthodox believer. Kulich is the Russian name for Easter bread. For the Eastern Slavs, festive bread was round and tall, and dough decorations were made on top of it. The cylindrical shape of the cake is associated with the church practice of baking artos. It looks like that. Sasha even said at one point "I don't get it why are we even trying let us just order one from a bakery".

Today they decided to drive to the tourist city Odessa. If you remember they were already there with Platon. By the way Platon is in a sport camp till 7th of May. So they made a lot of stories on their way there.

And guess twice who else is in Odessa as well?! Andrey and his girlfriend Alina. So of course they are spending now time together.

I am gonna pos later those IG stories if they are going to be on YT.

I don't know what they are saying but they make me laugh! The video's are so funny. The strawberry banter back and forth is hilarious. You could tell Sasha at the end was kidding her on her last line. I'm glad Platon is at a sports camp, they are a good experience for children.

@GuardianAngel You are right he was making fun regarding her last line with the strawberry. 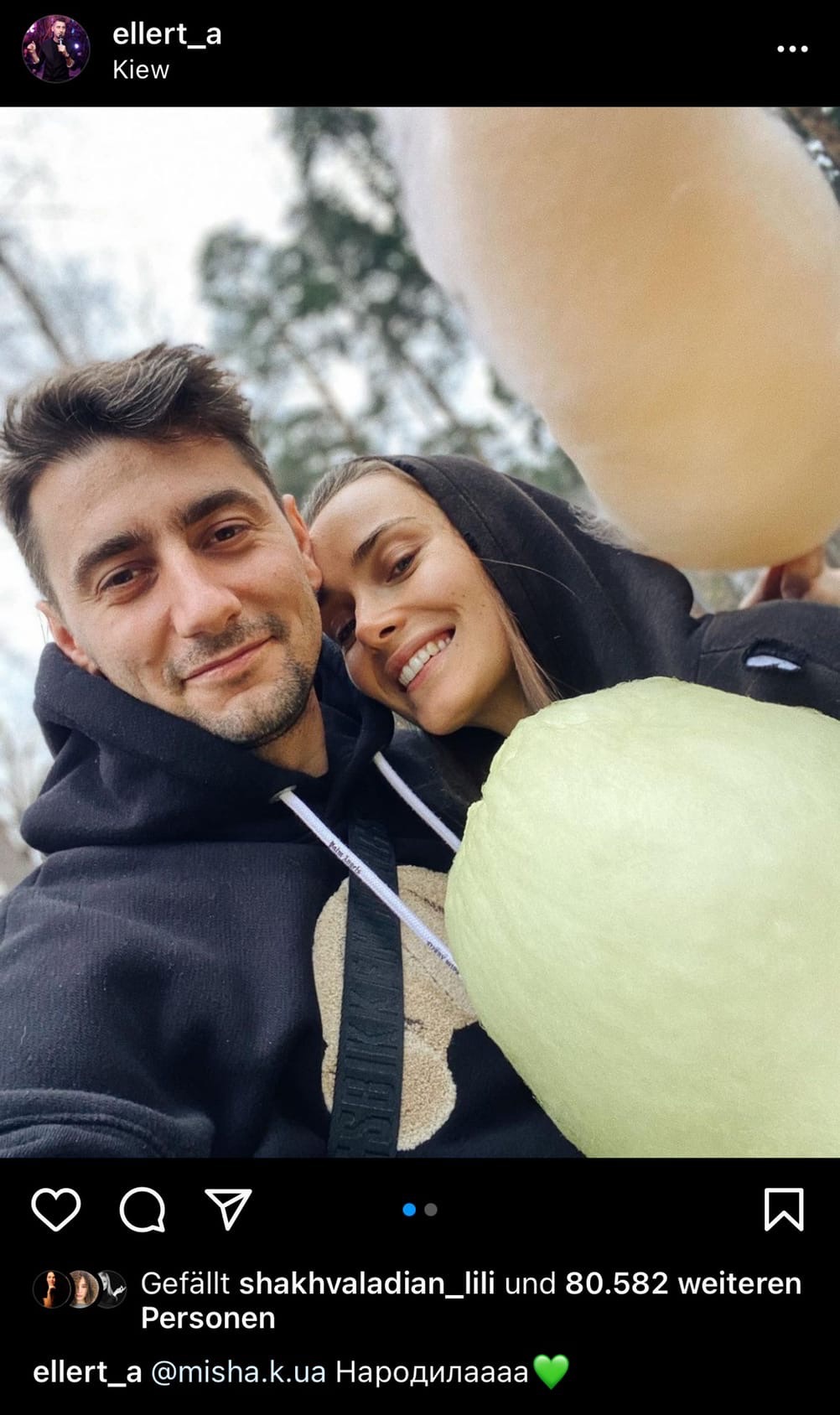 Here are the IG stories from yesterday with Andrej and Alina as well.

-Sasha is trying to be a gangsta rapper. Ksenia wrote: "That is why I choose him".
-Alina and Andrej are waiting in Odessa in the meantime.
-Ksenia and Sasha meeting with Andrej and Alina.
-At the Flacon Bar you can drink cocktails and try out perfumes. The woman is telling them about a perfume and let them smell it. Some of the ingredients is mango. Sasha is telling that he is allergic against mango. Andrej: "Call the ambulance!"
-They switched later the location and went to a restaurant.
-Sasha and Andrej are pretending in the elevator like they are at a Karaoke bar. They are singing the advert on the display in the elevator. Ksenia: "Just so you know we are in the elevator". Sasha and Andrej: "No it is karaoke". The elevator stops, the doors are opening, Sasha: "Now it is an elevator".

-Ksenia: "The sea, sun and love...and here is another love but this is my love".
-Sasha "We are still waiting for our dishes. She is so hungry she'll start eat me soon".
-Andrej with his girlfriend
-In the shopping mall. Guys found the playstation. Ksenia: "How things are going?". Sasha: Very good my love".
-Guys are trying out new styles.
-Andrej playing again. 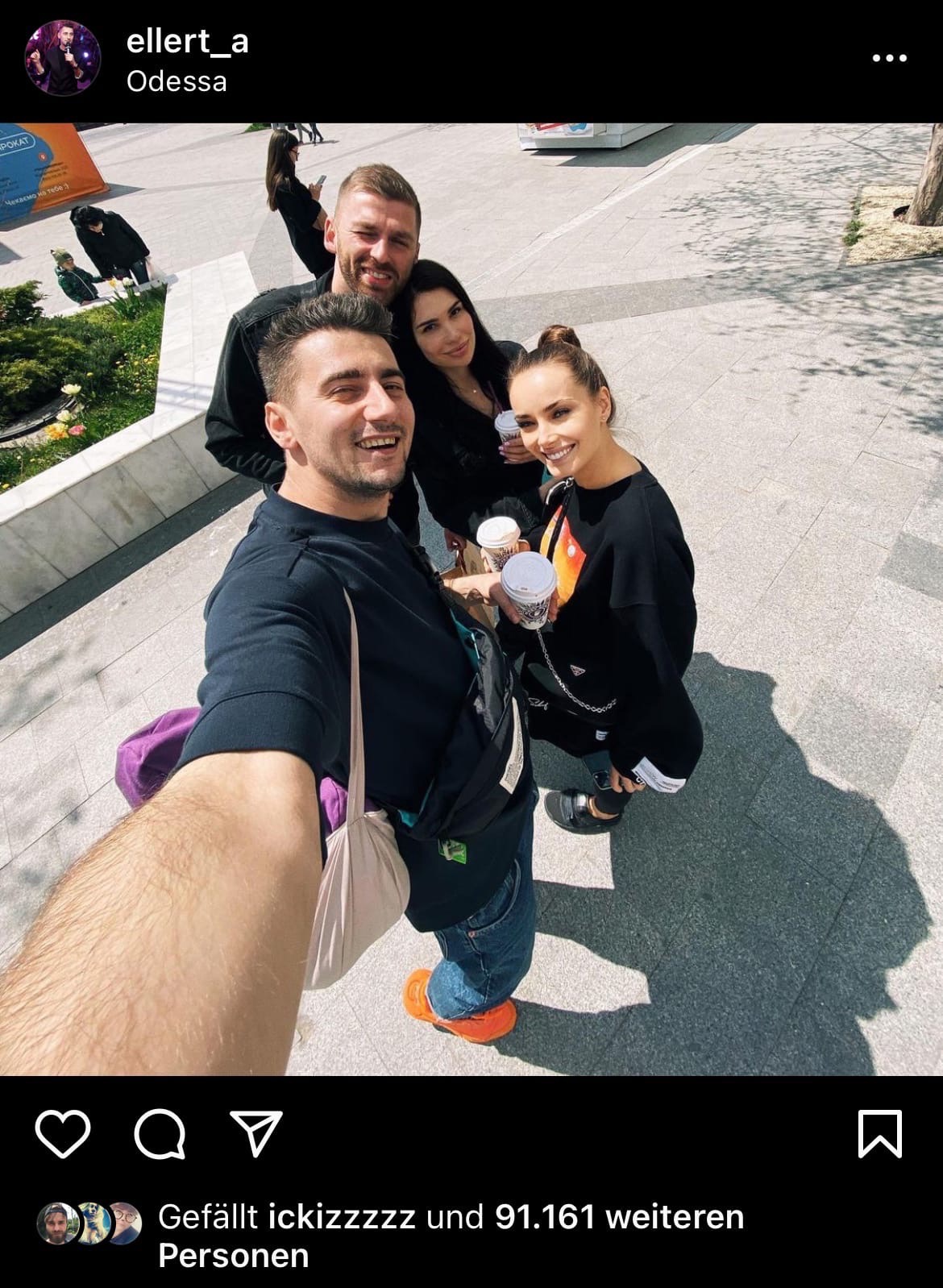 They are meanwhile back in Kiev. They had today early in the morning together a yoga class.

They are always so active! It's great to see so much positive energy.

They put the hamsters on the couch.

@GuardianAngel Lol yes they were cleaning their cage and put them on the couch.

They were filming yesterday and today for Masterchef Celebrity with Grisha and his wife and another famous couple. It was men vs. their women.

Today in the evening after filming they met with Sasha`s closest friend and his family. Ksenia adores their son Misha. They both were congratulating him in march for his first birthday.

Here is the IG story from Ksenia from today:

I'm laughing again at the hamsters.

Masterchef! These two are incredible! They have the best opportunities.

What a cute little guy. I'm glad they were able to spend time with their friends.

@GuardianAngel Lol Ksenia is more enthusiastic regarding the hamsters than Platon.

They are not going to have the opportunity to spend a lot of time with friends because Ksenia is filming again for the international TV Series. They are filming the second portion in Kiev now.

As you can see in her IG stories she is spending mostly the whole day on set.

Platon is since a few days back home from his sport camp. Unfortunately Ksenia was filming on mother's day so she could not spent time with Platon and Sasha.

-Sasha spent some quality time with Ely on Saturday
- Sasha saying that there is something they need an advice with. Sasha: "Platon wants to make Ksju a surprise since today is mother's day. He wants to make a cut in the middle of his eye brown. So what do you think, should he make it and we ask mum first?"
- Sasha and Platon were spending time with Sasha`s best friend his wife and his son. The son is the one Ksenia was posting in her IG story before.
- That video was sent to Ksenia from Sasha and she decided to share it in her IG stories. She wrote: "While mom is at work".
- Later Ksenia drove during her lunch break to Sasha and Platon, as she said "to kiss my two man and to drive back to set again". Ksenia: "Here is where I found my two man, there you can see Sasha, in the middle is Platon and here is our friend Shenia".

And here are some IG stories from today. Sasha was pretending like they made the slingshots by themself and Platon was saying to not believe him that he is joking and that they ordered them on a site. In the other story Sasha said to Platon that they are not shooting at animals, birds and cars.

Here is something funny from Ksenia`s IG story today.

Ksenia: "I am gonna show you something private right now. It is Sasha`s screensaver, check it out".

It is a pic he took from Ksenia when they were filming for Master Chef.

Sasha: "That is the reason why I am alway in a good mood".