All other Fan Threads here

@sdmom wrote:I agree but I am so very happy she and Nick found each other. I really like her more and more after the show. Too bad tptb edited her insecure and bossy but I think if they didn't do so, the show would be over after their 1-1 date. I remember even the non spoilers said she's the one after ep. 3. Anyway, I have the feeling Nick is so over this franchise. Interestingly Nick mentioned Love Connection on Twitter but nothing about the bachelorette. I am curious to see if he will live tweet in the future.
All Jmo.

I remember after that first date all of SM was basically like, yep it's her!  My guess is too though that aside from it being obvious Vanessa was his pick, IMO I think TPTB hid alot of their interactions because they really wanted to have the viewers think there was actually a real chance of his F1 rejecting him. They indirectly without saying it basically admitted to us the F1 being Vanessa when they announced the new lead before she even had been eliminated. They were saying yes he picks Vanessa but wait, watch, is she going to accept his propsal? (duh duh duh).  I'm not sure Nick and Vanessa will be initiating any talk about The Bachelorette themselves but when they've been asked together or individually about it recently they were very gracious and said only nice things. I don't think they are or will outright play "too good" or ignore the show but I do feel they are just getting lost in being with each other, starting up jobs/projects and seeing what the real world brings them. It's possible that Nick's tweet re Love Connection is more due to the host Andy Cohen who Nick struck up a friendship with after appearing on his show. IMO

@Sprite wrote:Now how long will they stay in that hotel room before they venture out and are spotted by fans?

There are a few fan pics on IG from last night when they went out for dinner and today. Nick posted an IG story in a car and Vanessa talking about a sugar factory that they passed by :P And Vanessa posted them at an Italian bakery in her neighbourhood on her story.

@mprssdbyu wrote:I actually thought they went to her uncle nightclub last night when I heard the loud music on Nick Instagram.

@MonicaJM2001 wrote:I think back to sleuthing during filming and that first Zero Gravity date pic with Nick and mystery girl "Vanessa." I kept trying to stay open and rational about it all since it was just one pic and no "in action" clips to refer to but since it is all done and over with I am admitting now that after seeing that one pic of Nissa, it stuck with me from then on that it HAD to be her. Just the look of joy and bliss on her face being in Nick's arms and the glow they had together hooked me right away. When there was speculation or trouble finding her in spoiler pics throughout filming it made me anxious that she might have been eliminated or no longer there by her choice for some reason. When RS F4 was released and her name popped up in it I got super hopeful and excited again which again at that moment seemed a bit ahead of myself as again I didn't know what their interactions looked like yet but it ended up being everything I hoped Nick could find in a woman and more so the mutual return of love and admiration she gave back. These past couple months that they have been free to openly share their love have been so fun to view and watch.

@mprssdbyu wrote:Lol, had to share. One of the comments on the Instagram photo V posted, as always so many varying responses. I ran across this one.  "Damn, what toothpaste ya'll use" Màde me

@joelle_fletcher getting final touches on her hair by the talented @celebrity_hair_ninja . I loved her hair tonight !! #makeupartist #bachelornation by @ginamo11

Our favorite dress EVER! Love this cheeta dress by @rorybeca (which is on sale) and these other cami dresses! Shop the link in bio on our @polyvore

The most amazing final

@Seabear wrote:Even CS does not deserve that kind of punishment.

I am hoping for a true Josh and Amanda connection.  I really think they could be a legitimately happy and compatible couple in RL.  Bring on BIP....I can't wait.

No he does not. But he's somewhat safe to talk on twitter. Oh wait, he'll be #24 in her next book which will be all about how she was wronged on Social Media.

Back to the topic, I was one of Amanda's few fans during Ben's season so hope the best for her and those kiddos.

#24, #23 and all the rest of them must be thanking themselves for a very lucky escape.  Maybe they have their own dating issues but this tops it all off.

Are we going by the numbers in the book or the series??

I was going from the book numbers she used instead of their names. Yes, Josh #25 and Nick #24 are tweeting and liking each other's tweets tonight about the football draft. Marcus and Tanner too, they are all having fun.

Are we going by the numbers in the book or the series??

I was going from the book numbers she used instead of their names. Yes, Josh #25 and Nick #24 are tweeting and liking each other's tweets tonight about the football draft. Marcus and Tanner too, they are all having fun.

Just saw the short clip. How is it possible that MeAndi is even more fake now. Oh yeah,

when she's actually just a star in her own mind. :Nod:

And, on twitter now, #24 & #25 are tweeting  & liking each other's tweets, hilarious! Now if only #1 would join in, what a blast, bros united against a fake biatch!

@Ladybug82 wrote:Right there with you blu!

I can just picture dates for their season...  Group dates consisting of even more competitions than normal.  For example: who can drink or not spill the most Advocrap Spark or coffee while holding a modeling pose and of course clothing would be limited and unbuttoned.

I don't actually mind (but not overly fond of) either guy...but oh what fun it would mean!  Ratings gold and what a snark fest it could be.

This would make a great season either way. Bring in #24, or Farmer Douche as I like to call him and it would make a party.

@AnandaMarie wrote:We don't know if he will go on BIP, but if he does, then is it fair to accuse him of leaving the sick dog he claims to love to hook up with girls on a beach?
I agree that his popularity drops after time. It's true for all past contestants but if he does BIP, it seems like he's desperately trying to hold on on the little bit of fame he has left. Really, why do another reality show?
But I guess it remains to be seen.....
Not calling him a player but Brooke was a date though. He took her to a Hozier concert on March 13th last year. I think he met friends at some point that night but people tweeted about seeing him with a woman.

@AnandaMarie wrote:Not saying she isn't well taken care of. I'm just saying that he might be leaving her. If my dog was sick, I wouldn't leave her to go hook up with guys on a beach even if she was being well taken care of by family or a very close friend. I'd want to be there and spend time with her but that's just me.

Or an extra $7 to $14k could pay for a lot more top of the line treatment for Sabel while she is well cared for by her loving Grandma. You can look at either way. Bone cancer can easily spread. This treatment may not be the last set, so why not earn and save a little extra in case she needs more.

IMO, Josh can date whoever the heck he wants who is of legal age. I would rather someone figure out by dating what is right for them rather than marry the wrong person. Like LB said, IMO, Josh's good definitely outweighs the bad.

I never want to see the Ashley I and Jared freakshow ever again.

Su ‏@Sukinya 2h2 hours ago ARIA Resort & Casino
Nice meeting u guys! Let us know if u need anything while ur in town #thebachelor #bachelorette 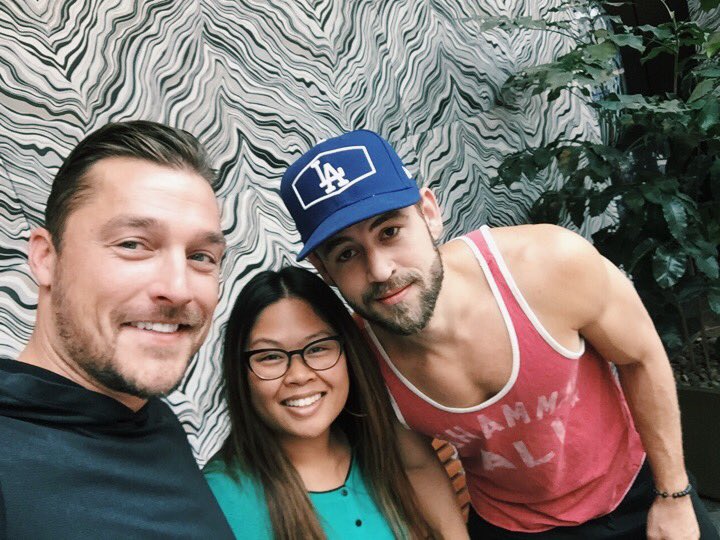 @Seabear wrote:Just read the Cosmo article.  Andi is just Barf.  Basically she wants a guy who is everything she is NOT....loyal, kind and nice.  Good luck with that.  Reading the article I could hear Andi's whiney profanity laced voice with it's nasal, self righteous, holier than thou inflection.  I am now suffering from PTSD...AD strain.  Andi is hands down the most annoying, unlikeable, self involved, egocentric, narcissistic, classless Bachelorette of all.  I am trying to think of some redeeming quality but I am coming up empty.  This book is an embarrassment.  Just NO. If she writes her 2nd one maybe CH will get a chapter dedicated to him.

She had at least two on her season, Dylan and Brian.   Thank God for them that she let them go.

See this is my problem (because Andi cares about my problems with her book I'm sure) if her number system is real how am I supposed to figure out numbers 2-20? They are all interchangeable to me. Seriously, I forgot about Dylan and Brian as I try to forget about most of her season. If they didn't mosey on over to Paradise later or are numbers 24-26 there's no way I could name them with a gun to my head. I actually remembered liking a couple of them and screaming "RUN" to my television whenever they popped up. I would like to know what she thought about them; not enough to buy her book but if someone did and wanted to relay that info to me I'd listen or read or whatever. How, though, would we know who she's referencing?

I'm guessing the only 3 men that even get mentioned will be #1, #25, & #26. There is an outside chance that #24 will get mentioned, but only because he became the next Bachelor. And I'm guessing she'll just refer to him as Chris. If she even talks about him at all.