Chacharo I am not calling anyone stupid I am saying to have such strong feelings such as hate towards someone you don't know is foolish. It isn't hurting that person only yourself.

Chris Bukowski ‏@chrisjbukowski
Heading to Epic Lounge in Chicago with @eswiderski to celebrate him getting older... Come join us!!

There's an extended clip of Ed drunk in the pool if anyone wants to see it on EW.com 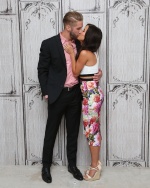 I was a big fan of Ed during Jillian's show but think now it was because she really wanted him and I didn't like anyone else other than Kiptyn. He was never my type of guy in any way and I can see that now. I'm definitely on Jillian's side after the breakup and won't say bad things about Ed in the time period he was with her but am no longer a fan.

I wasn't impressed at all by Ed on BP. Did he really think it was a good idea to get drunk on tv & strip down to his undies? :shocked!: I was never a Reid fan but he's looking better in comparison (no I don't think Jillian should have picked him).

Nowadays the broad-shouldered dudes on Bach/ette tend to be mega-buffed. By stark contrast, Reid (& Ed) are both refreshingly "padded". That you-could-lose-10-pounds look is part of their reality-charm IMO.

If Jill has no problem with him, I know it's okay that I don't either. Seems she finds him entertaining.

@jillianharris
@eswiderski u crack me up! Keep focused on the beauties that actually know u. Yo.

And at least he knows he's not perfect and can make fun of himself.

@eswiderski
@jillianharris you're always classy, and once again you remind me. I may need a little help in that dept sometimes :) but at least I'm fun.

Ed's gave a lot of insight into things with his conference call from yesterday. Here's one of the articles about it.

'Bachelor Pad' Ed Swiderski Q&A: 'Next week is a turning point for me'

And I'm happy to know I wasn't totally crazy for thinking he might be dating someone.

That was an interesting interview, umngirl. It sounds like Ed cools it on the partying and takes it seriously.

Behind the scene pics:

@Bex1230 Until you set that bitch on fire RT @eswiderski: @chrisjbukowski OM was loyal to me.

@eswiderski @Bex1230 @chrisjbukowski i thought it was burn the ones you love...apparently it's set them free.

*DEAD* dude doesn't take this ish seriously yo and it's hilarious