Didn't want to post these links in the fan forum for Anna and Tim.

On Monday, Anna Heinrich sparked rumours she'd split from Tim Robards after she posted a photo without her wedding ring, and later flew to Melbourne and checked into a hotel rather than staying the night in husband's home.

Anyone with any opinions?  I'm personally torn between "it's just dumb rumours stoked by Kyle Sandilands who doesn't seem to like Anna much" and "where there's smoke there's fire".

Tim commented in reply to someone who tagged him about this on SM and said it was absolute rubbish and not to give the clickbait nonsense attention. He and Anna were both together at the Melbourne Cup with her family and all together. Anna arrived earlier and was working at the cup and Tim arrive later and was working with his Neighbors costar (looked like they filmed something at the races for the show?). Seems like the articles are stemming from Tim acting and living in Melbourne so much while filming and Anna living in Sydney. They seem just fine with that arrangement though and nothing changed with them from what I can tell having followed them. If there is something amiss, I am sure it will come to light later on but I think this is media trying to stir things up, especially since Tim now acts on a soap opera with an onscreen love interest. Anna likes all his posts about his acting and follows and likes the actresses he works with and seem to all be friends. One thing though is Anna's family, her mom and sisters, there is no way they'd be liking Tim's posts and commenting etc if something was awry with Tim and Anna. Anna is very very close to her family. If anything was amiss, the sm activity of her family would be the first thing that would change imo and no way they'd be liking Tim's posts like they always do and hanging out with him and Anna, eating together like they do with family meals etc. The sisters would unfollow and definitely unlike his pics. So would the mom. That's not the case.

I have heard Kyle say other mean things about Anna (on his radio show he said it was pointless her becoming a lawyer, he earns more than her being himself, he hates how she has to be on his "trial by kyle" show as a legal expert, etc) so I really wondered if he's started the whole thing.

@leavers knowing Kyle he definitely would start something like that. Probably mad that Anna isn't into him and is faithful to her better looking husband than Kyle :|

Not sure where to plonk this but rumour has it Sophie Monk might be on IACGMOOH.  She'd be great IMO!

Back to Channel 10? I wonder if that does mean Love Island is canned? Are there ever participants in that show from other networks?

@leavers wrote:Back to Channel 10? I wonder if that does mean Love Island is canned? Are there ever participants in that show from other networks?

Yes I'm pretty sure Love Island isn't being renewed. I was lurking on the Big Brother 2020 forum and there was talk of Sophie potentially hosting (looks like it might be Sonia Kruger again though - GROAN).  But yeah I suspect Sophie may be available in 2020.

Sophie would be great

Yeah I agree @leavers.  Seems lots of people are wanting Gretel back too (Golden Era BB - none of the reboots cut it without Gretel IMO) or even Chrissie Swan, but Sonia apparently just quit her current gig to move to Ch 7 so people are thinking it's probably her (hopefully not though).

The new reboot actually looks really interesting - seems to have a Survivor element and is possibly being filmed on Cockatoo Island which is ROUGH.  Apparently they are deliberately not casting influencer types but rather going for people with strong opinions and interesting back stories.

Sophie is still a contender - the host hasn't been announced yet - so fingers crossed.  I posted the trailer here for anyone interested.

Moved from the FAN thread.

@ZeegaZigHah wrote:Hi Bachie fans, just posting this here since all the other Matt Agnew The Bachelor threads are already locked. A little lookback at and question about the former Bachelor.

) and obviously hair dyes, eyebrow darkening and consistent and rigid gym trainings plus massive calorie restrictions (ouch), and also! studying like a true nerd "how to screen kiss"

, all to shape up as The Bachelor with the innermost (IMO) intention to become a Science TV/Media person (aside from the snoggy perks left & right, of course

), his SOCIAL MEDIA has been MOSTLY SILENT since coming out of the show, as far as Science talk is concerned.

Aside from a little snippet of what appears to be small sciency thought one week, then an upcoming science event announcement the next, NOTHING SUBSTANTIALLY SCIENCY has really been coming out of the former Bachelor, Dr. Matt Agnew. 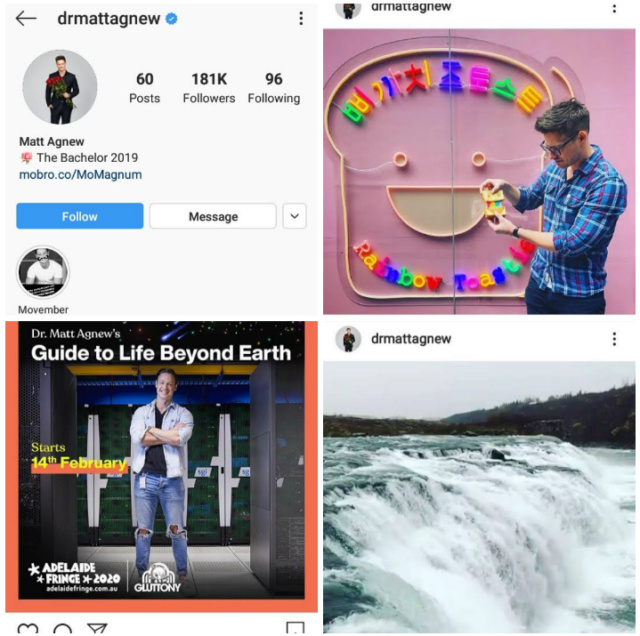 
Matt has stated in many interviews and guestings during and after the show that he'd "always wanted to make science easily accessible" to the public, along that line. Though he had a disclaimer of not having "the delusion", but hey, being The Bachelor stages a person to wide open gates, right? No doubt. 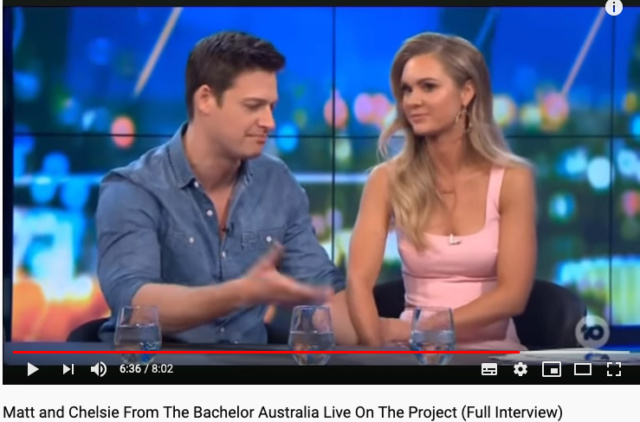 
And for a TV star to unnecessarily place (as a fellow Bachie viewer has stated here) "Dr." on his instagram handle, with 181K followers (well that's A LOTTTTTTT compared to a lot of Australian TV stars, including Osher's 139k who's in The Bachelor every single season

) DR. Matt Agnew has been totally wasting precious golden exposure to make his contribution to "making science", Astrophysics in his context, "accessible to the public".

Aaaaand with the #AustralianBushfires going on, Dr. Matt could have that golden opportunity to glowingly fill the brains and curiousities of young and not so young Bachelor followers on climate change=bushfire=atmosphere=outerspace talks.

Hey, it doesn't take a social media expert or a stat scientist to figure why his instagram should have been his own personal medium for educational molten gold!

Well, that's just all my opinion. I'm not particularly a STEM person, but I so dig science talks in popular media. Maybe the very reason why I decided to waste my time watching The Bachelor because of the overly-hyped scientist lead that the show "discovered".

I don't blame him if Chelsie is not really "the one" for him. It's the way he handled most things in public that have been just too superficial or actingy (IMO) to give off that genuine love aroma coming from him. Chelsie seems to have a fragile heart who needs quality & quantity time from a relationship, and Matt obviously could not give that for some reasons. Despite having his little calculation of "The Bachelor Australia has a pretty good statistic of finding long term relationships of 50%", maybe he's already figured by now, thanks to "just life"

, it's now down to 43%. But who can really blame the guy, he's just a person on his own growth, just like everyone else, after all.

But failing on the public sciency pursuit bit after being The Bachelor?

IMO he is doing some sort of sacrifice. A sacrifice Matt Agnew makes just to hide from all your fan questions out there

. Really, he has been mostly hiding from all instagram exchanges with fans regarding Chelsie since they went official. I still believe though that they had a real relationship, but lurrve as much lurrve as Chelsie had for him??? Nah. A person as extroverted a geek as Matt wouldn't be able to stop talking about what he's passionate about if he really had been passionate about that relationship.

We understood they were kind of going the "private route' with only 2 or 3 poorly snapped date photos together post-show like they were still hiding. But opportunities for Bachie fans to flood his science post with Chelsie questions even if he didn't have to reply to everyone while they were still on? Not for extroverted Matt, it appeared.

So there, Matt Agnew, former Bachelor star, a genuine pursuer of being a 'Science Man for the public" with 181K Instagram followers and 6 weeks of The Bachelor Australia, is a Silent Science Man


By the way, speaking of stats, this "sample size" convo with Lee Constable is kind of funny. 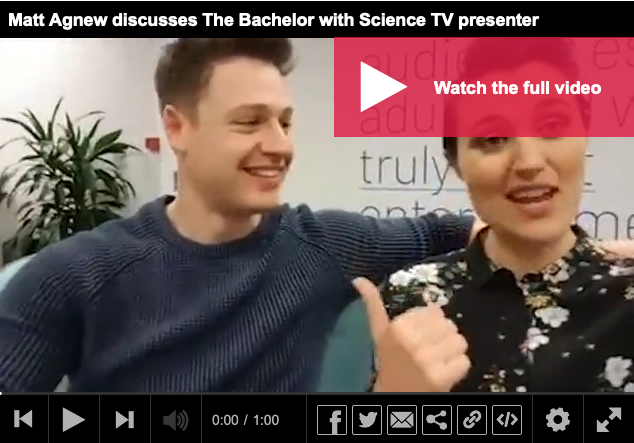