do you think possible Ten decided to cancel or postpone her season on air but also decided to go further with the crew and tape until the finale?

In my opinion, they should have canceled her and replaced the lead. I do not think the audience will be interested at all. I also think it will be a flop rating wise.

who do you think is the most popular if they decided to recycle one? In my opinion Kiera or Bibiana?

I think Kiera is gaining major sympathy right now after the breakup. Bibiana cried a lot not finding love and it seems that prods like her a lot.

Ali is not back on SM yet as of today. I wonder why.

But Bibiana is not Australian?? And no way will I except Kiera! Pls nooo just cancel the whole show;) or start again with on of nicks rejected girls? Brooke, Sophie or even Britt

@LeapofFaith wrote:But Bibiana is not Australian?? And no way will I except Kiera! Pls nooo just cancel the whole show;) or start again with on of nicks rejected girls? Brooke, Sophie or even Britt

Aweeee I think any of those girls would be fun to watch but Kiera would be my fav. Drama queen fav

@Storybook wrote:Interestingly Ali still hasn’t posted anything on SM. The stats remain the same as 03/09.

I honestly feel like something weird has gone down with Ali's season.  I'd love to know who the three people were she unfollowed (imagine if it was Osher, Stringy and the Bach main page

) but perhaps it wasn't her unfollowing - perhaps three people (companies?) blocked her, because they don't want to be associated with her after "whatever it is" goes public.

Also Nick has been in Adelaide the past couple of days for no apparent reason (he did a promotional Facebook stream with the Advertiser but nothing else that I've noticed).  Damage control meetings in Adelaide with both Leads?  IJDK.....

@LeapofFaith wrote:But Bibiana is not Australian?? And no way will I except Kiera! Pls nooo just cancel the whole show;) or start again with on of nicks rejected girls? Brooke, Sophie or even Britt

It won't be either of these two - no one would know who Bibiana is unless they watch the international shows and she wouldn't appeal to the Australian audience anyway IMO.  Keira has already overspent her 5 minutes of fame and needs to go away, IMO.  If they are recasting, it would be someone from Nick's season IMO.  That's what Sportsbet are implying too......

ETA:  Has anyone from Nick's season been suspiciously quiet on SM or only posting things that could be someone else?

By my reckoning Nick's Bachelor season will finish in the first week in October. If this is correct then following the previous trends the Bachelorette will premiere a week later. If this is the case Ali's season may well still be filming.

I can't remember what was reported in the media leading up to Sophie's season. Was there a media blackout in the weeks before filming finished? If there was it would explain why Ali hasn't been mentioned in an article for a month.

IMO three people unfollowed Ali as I don't believe she has access to SM. Either that or she is on a deserted island with no internet coverage, trying to figure out why no man is perfect enough for her.

I wonder if they had to have a break after Ali's "meltdown"?  I agree everything seems to be weeks behind last year's seasons (airing as well as filming), but there were still articles during the Sophie's last month of filming - especially about Stu - yet we've heard nothing about any of Ali's guys except Ivan.  Maybe the press just don't care.  Might be a theme this season. 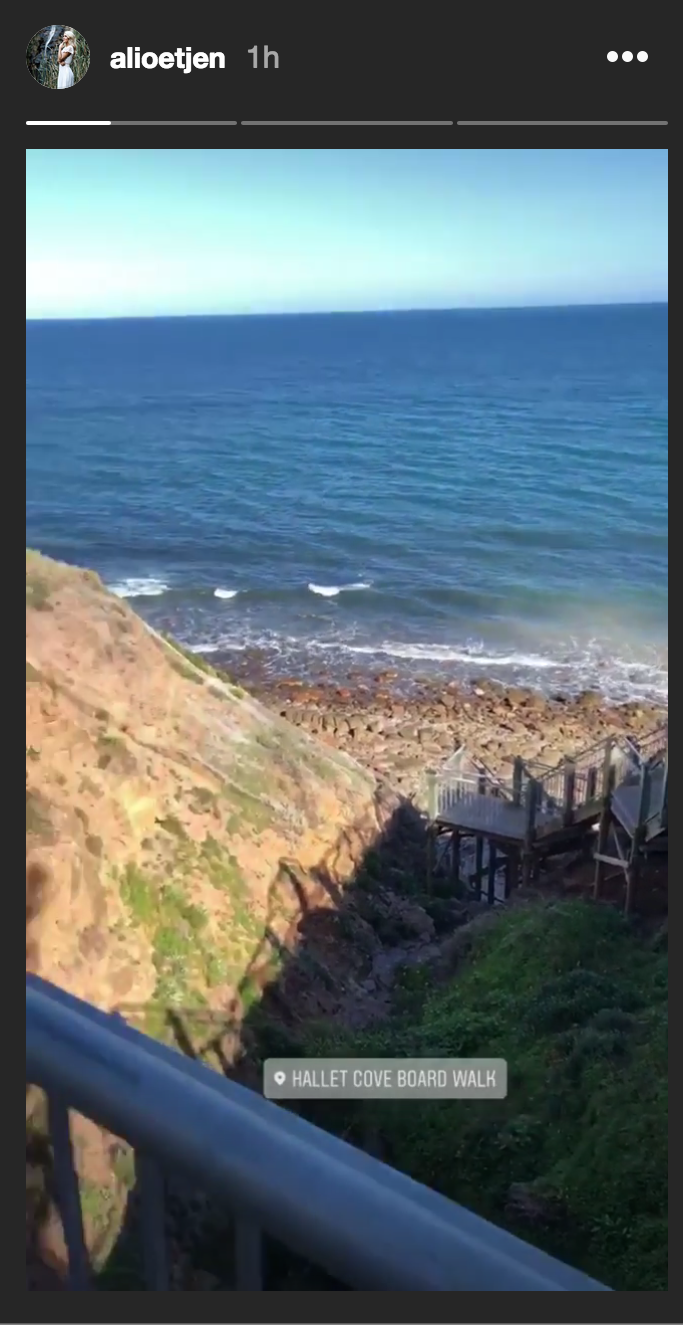 It’s interesting that she’s been hardly papped. Especially with all the appearances at airports she would’ve made through airports with HTD and FRC. Maybe she found no one and has been recast for BIP season 2?

Posting and will update...

June 27 = M&G Night One = usually they film over two nights; total # of men night one?
July 6 = SD with Rob = at Cockatoo Island. Ali and her suitor enjoyed a bit of brunch at the cafe before the pair got hands on with a 'task' which involved writing their fears on a large 'vision' board which they then drove through in an ATV buggy. Ali's fear included 'Manipulation'(here )
July 9 = GD = 15 men on gladiator theme date; it is 11 days into filming; if Ep 3 then likely 3 men already eliminated and all contestants on GD (here, here)
July 19 = GD = 6 men (Todd, Taite, Charlie, Dan, Peter, Rob) parenting theme group date at Galston; challenge involved the suitors demonstrating their parenting abilities with a bunch of kids. First the suitors had to put together a kids bike as the anxious youngsters waiting impatiently for the moment to ride their new bikes. Next Ali refereed while the guys played a game of football with the kids (here)
July 24 = GD = F10 men on group date (Taite, Todd, Bill, Dan, Rob, Charlie, Daniel, Peter, Danny, Paddy); Ali's sister and friend at the bette mansion (here, here)
July 27 = possible 2nd SD with Todd = at a Mosman residence with sweeping views of Sydney Harbour; matrix media timestamp is July 27, DM says Wednesday which was July 25; thus filming dates could be different than what is listed on matrix (here); for timeline comparison, Courtney/F4 had his 2nd SD less than a month later from beginning of filming; Matty J had his over a month from filming (here) which mean if Todd's date is a 2nd SD then it is similar in timeline or if too soon could be his first SD like Matty J who got the last date before 2nd SD's.
Aug ? = HTDs = F4 men are ? ? ? ?
Aug ? = FDs = F3 men are ? ? ? (usually filmed in Australia)
Aug ?-Sept 5= finale week for MTP and LCD = F2 men are ??(usually LCDs are more extravagant than FDs and filmed overseas)
Sep 2-5 = FRC/end of filming (need confirmation of finale filming wrap date)


Note:
- If timestamps are accurate then night one filming began June 27 (a week later than Georgia Love's season for comparison) and possibly wrapped ~Aug 31-Sept 3 (a week or more later than GL's August 26 finale) depending on if there were more men cast and kept longer.
- Approx 3 weeks/21 days into filming (June 20 - July 11) GL's season had 10 men remaining (she started with 16 men)
- Approx 4weeks/27 days into filming (June 27 - July 24) Ali's season had 10 men remaining (likely started with more men than GLs season? Longer filming schedule by a week?
- Timeline for Comparison: Georgia Love's S2 filming schedule (June 20-Aug 26) here
-  Ali on IG she was active on IG two and three weeks prior respectively to her Sept 3 IG following #'s changing so it could have been when flying to HTDs or FDs.
- Ali liked comments and things on IG on Sept 6 so FRC was before then for sure

Episode 1 (Wed Oct 10)
Synopsis: Ready to find her one true love, Bachelorette Ali Oetjen is putting her heart on the line once more, hoping to meet Mr Right amongst the 18 eligible bachelors all vying for her heart.
*filmed June 27* (usually they film over two nights; #18 of men night one)
M&G/Red Carpet arrivals = contenders focused on were: Charlie (first arrival), Rob, Bill, Todd (last arrival; long intro); Taite shorter M&G
Wild Rose = Bill gets the wild rose which allows him to steal someone else's date
RC = Todd called 2nd, Taite in the middle near end, 2 men eliminated=Brendan and Ben (16 men remain)

Episode 3 (Wed Oct 17)
Synopsis: It's time to strap on your sandals & breast plates, The Bachelorette Australia is going Gladiator for a group date. Later, with rumours swirling, Ali confronts a Bachelor.
*filmed possibly week of July 6 - July 10*
SD (filmed July 6) = Rob at Cockatoo Island. Ali and her suitor enjoyed a bit of brunch at the cafe before the pair got hands on with a 'task' which involved writing their fears on a large 'vision' board which they then drove through in an ATV buggy. Ali's fear included 'Manipulation'(here ); Rob on date with rubber boat under Sydney Harbor, ATV buggy and fears on vision board, receives kiss and rose
GD (filmed July 9) = 15 men on gladiator theme date; it is 11 days into filming; if Ep 3 then likely 3 men already eliminated and all contestants on GD (here, here)
GD SQT winner = Ivan (no rose at SQT, gets one at RC)
RC = Todd called second, Taite called after Todd, 2 men eliminated=Wes and Damien (13 men remain)

Episode 4 (Thurs Oct 18) - Yet to air (will update once aired)
Synopsis: On the single date, Ali and her chosen Bachelor head to the river for an afternoon of wakeboarding, but it is the chemistry between these two that makes the biggest waves.
*filmed possibly week of July 11 - July 15
SD = Taite got the datecard but Bill stole the date with his wild rose; kiss and rose
GD = Compatibility test with 8 men (Charlie, Rob, Bill, Ivan, Paddy, Joules, and Danny); Danny wins
SQT = Danny (awkward)
CP/RC = 1 man eliminated=Nathan (12 men remain)

Note: I am currently working on Episodes 5-12 and tying them into the filming schedule