That's great news. Thanks for the clips @bluwavz Michelle is a natural.

I'm not a podcast expert, but isn't it recorded once a week? I can't see that interferring with her teaching job jmo. I haven't heard she left her job but I could be wrong.

They will have a lot of fun together.

I think Michelle's a great choice! I imagine they can record it when Michelle is home in the evening or weekend since they get the shows early.

I wasn't able to capture the IG story in time but Rachael K. had a story up with her, Matt, Michelle, and Nayte in. Apparently, Matt and Rachael were in MN for the Final four and were hanging out with Michelle and Nayte at some point. I wish I could have captured it before it expired.

I checked Rachel and Matt's IG but it wasn't there either.

I checked Rachel and Matt's IG but it wasn't there either.

Yeah, I literally saw the IG story like 2 hours ago but I failed to capture it as I thought it would be up at least for another 4 hours, but I was sooo wrong....

Swipe to picture 8. It’s the clip of them four together 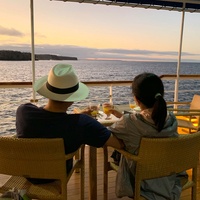 @sdmom Thank you for posting!

@sdmom thanks for bringing that over.

It's nice to see the friendships that are the results of being on this show.

They are so cute. Even though they are long distance they are making it work, plus they travel together a lot.