@Bobette wrote:snipped
In 2020 I'd like to see two people standing at the FRC that are clearly, genuinely into each other - no matter what age or what they do for a living - because I don't feel like I've seen that since Matty and Laura TBH.

I agree. Over the years we have seen many "grown up" what ever that means, be the lead who didn't last long. Then there are others like Colton Underwood Bachelor USA who was 25-26? who didn't play TPTB's game, let the F2-3 go early because he knew who he wanted, went after the girl he wanted, and as of today are very  happy.

The older I get after watching the U.S franchise from the beginning, I'd like to see older mature leads and contestants, however I realize over the years, age doesn't mean anything IMHO.

I get your point @GuardianAngel. Age is relative, unfortunately, I think Colton was the exception. I guess what I would like is for the casting department to do a better job. Get a lead who is at least somewhat serious about finding a relationship (rather than just about increasing their IG numbers and influencer stats) and then do a good job of finding suitable partners. Now it just seems they are casting for drama, stupidity and the crazier the better. Yes, there are younger people out there who are interested in something serious, but frankly I see less and less of them and so I personally find it harder to suspend belief that they are even remotely on the show for that. I find it hard enough to believe even with the older crowd, so with the young ones...see Abbie...it is basically impossible for me to think they are there for anything other that to promote themselves.

PS … I finally seem to have resolved my computer issues. Apparently it was my Kaspersky security that was the culprit, not the Windows upgrade.

OK so this is interesting.  Matty J has been spouting off about a lot of Bach/Bette stuff lately, and with him on the Ch 10 payroll (Luxury Escapes) I have my suspicions that TPTB use him as a bit of a mouthpiece.

Anyway, he's predicting Ciarran is next Bach and I wonder if this is TPTB's way of testing the waters to gauge public opinion.  His point about him being set up for Lead if he leaves Paradise heartbroken is logical IMO.

Our patience levels have definitely diminished over the years. The second a season of The Bachelor ends we want to know who will be the Bachelorette or who will be on Bachelor In Paradise. And it’s fair enough, we don’t like waiting.

Well, turns out Matty J and Natalie Bassingthwaighte feel the same and they’ve taken a guess as to who will be the next Bachelor while chatting on The Babble.

Ciarran Stott was in Angie Kent’s season but had to leave the season due to his grandmother’s passing.

Nat has her fingers crossed:

But of course this is just a hopeful guess:

“‘Cause his ex-girlfriend was also on The Bachelor but they didn’t do very well then after he left the show they hooked up in Bali and were photographed together apparently they were both together on Bachelor In Paradise but it all depends on how the season plays out for Bachelor In Paradise. Only if he’s left heart broken then he is perfectly set up to be The Bachelor.

It’s got Nat’s seal of approval:

@Bobette I think this has been discussed in previous seasons, that if you are on BiP it is virtually impossible that you can be the Bach, because filming starts before BiP even airs.  Regardless, I don't think Ciarran will mind the publicity and the fans pumping for him imo.

@Agent99 Yes the filming/airing schedule is a mess and needs to be changed IMO and I said myself upthread that Ciarran being in Fiji ruled him out but IDK... he seems to have been suspiciously well behaved since he got back which has me

And he was back on SM 2-3 days before Renee, which would fit with getting near the end and then Renee choosing someone else and him being ripe for Bach, exactly as Matty says.  It just feels like it might be TPTB's way of putting the feelers out.

If they really wanted Ciarran, TPTB might just cop it on the chin that him being Lead would be a spoiler for how BiP ends.  Or he may just be behaving himself so as not to give anything away re: BiP and Matty mentioning him is just a red herring.

I don't think the fans are pumping for him though - they'd rather it be Timm IMO but I can't see that happening (too much of a loose canon IMO).  All things considered it's probably going to be someone else - I just thought it was worth noting.

I think Ciarron seems like a top bloke, but I’m not interested in watching an entire season of him as The Batchelor. I don’t think he is looking to settle down permanently or long term. He’s not a believable Bachelor.

I think Timm would be much entertaining as the Batchelor, but I don’t know that he is really looking for love at the moment. I would watch him as The Batchelor though, because...well...his face

Filming reportedly to start NEXT MONTH and they want a medical doctor - following Bette NZ's lead?

Move over, Matt Agnew! The Bachelor producers are looking for a DOCTOR to be this year's suitor

Channel 10 surprised everyone last year when they announced Matt Agnew - an astrophysicist and university lecturer - as The Bachelor.

And it appears the hit dating show is once again looking for a brainy leading man.

According to Aus Doc, producers have contacted the Australian Medical Association trying to 'secure a male doctor who can pack a stethoscope as well as a six pack'.

Move over Matt Agnew! Producers are looking for a doctor to be the new Bachelor... so can YOU 'pack a stethoscope as well as a six pack?' (Matt is pictured on the show last year)

Filming is reportedly set to begin next month, with the age range for applicants being 27 to 40.

It comes after last year's Bachelor officially changed his Instagram handle to 'Dr Matt Agnew' to reflect that he'd obtained a PhD.

Whether an academic chooses to adopt 'Dr' before their name is a personal choice, but it seems Matt wears the title with pride.

'Hot nerd': Matt Agnew is an astrophysicist and recently changed his Instagram handle to be 'Dr Matt Agnew'

His social media handle also draws attention to the fact Matt, 31, is to date the first and only university researcher to front an Australian reality show.

According to his LinkedIn, Matt obtained his PhD at the Centre for Astrophysics and Supercomputing at Swinburne University of Technology.

While he may glowing academic credentials, Matt's search for true love on The Bachelor was sadly unsuccessful.

This is so meta. 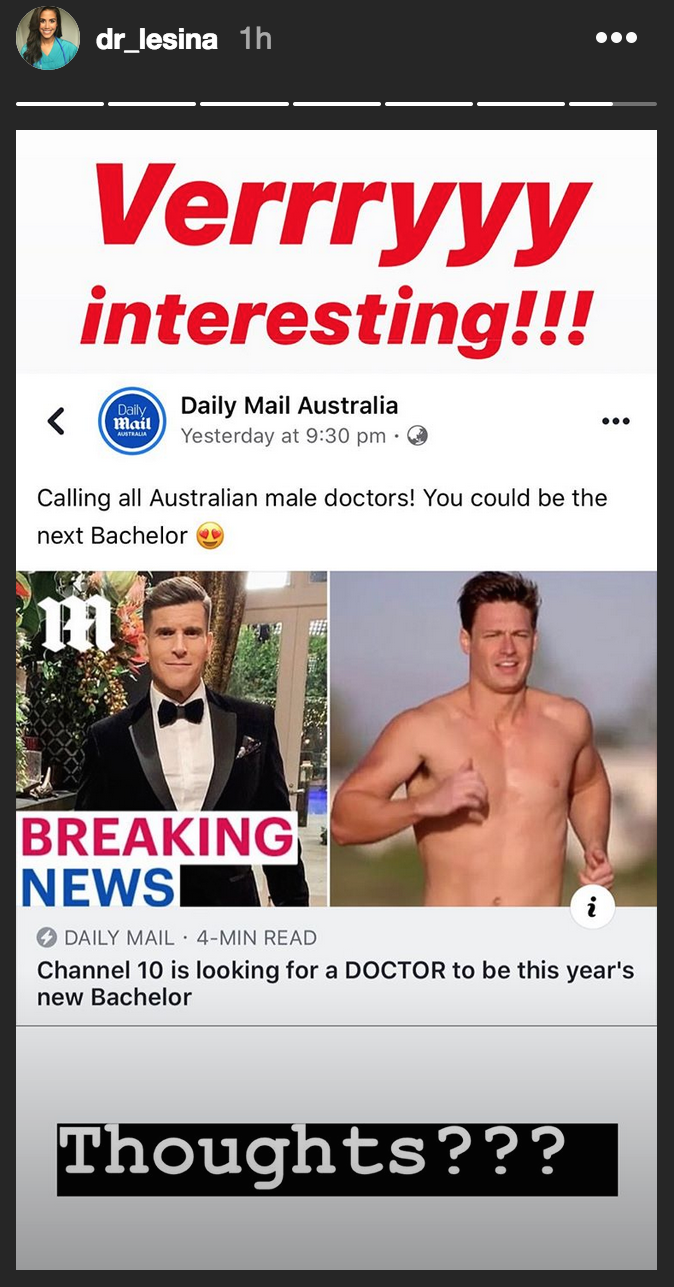 Dumb casting IMO - Pete would have met hundreds of air hostesses and a doctor would know hundreds of nurses.

Pretty sure a Lead would be more interested in the opportunity to meet people they wouldn't usually meet in their everyday lives IMO.

I don't see what the advantage of that is.

I think someone needs to be fired.

TPTB seem to be all over the place and are sounding a bit desperate TBH.

Is this the next Bachelor? Producers approach world champion athlete on Instagram to sign up for the show 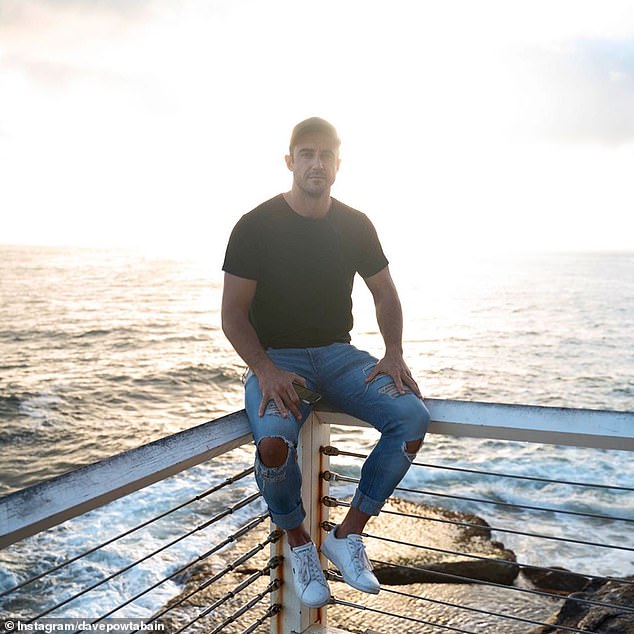 The Bachelor producers have approached a world champion athlete on Instagram to sign up for the show.

Dave Pow Tabain took to the platform on Wednesday to reveal that he was contacted by a Warner Brothers casting agent asking him if he's interesting in applying for the dating show.

Sharing a photo of the message he received, the 30-year-old kettlebell world champ and author asked his followers: 'Bachelor YAY or NAY?' 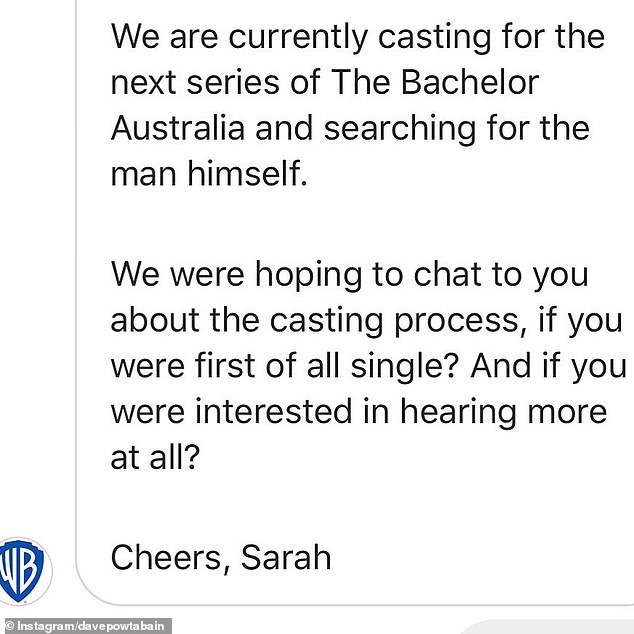 'We are currently casting for the next series of The Bachelor Australia and searching for the man himself,' the message read.

The agent added: 'We were hoping to chat to you about the casting process, if you were first of all single? And if you were interested in hearing more at all?'

Speaking to The Daily Telegraph on Thursday, Dave admitted he had never actually watched the show.

'I had a bit of a laugh and I don’t watch TV but I’d heard a lot about the Bachelor and I thought it was funny they were hitting me up via Instagram to get me to apply.'

He went on to say that it is however a 'potential way to meet someone that could be the right fit for you.'

Dave also revealed that he did take his application further and contacted the casting agent.

Meanwhile, a casting call has opened for all hopefuls wanting to appear on Bachelor or The Bachelorette in 2020.

The Bachelor website urges men and women between the ages of 23-40 to 'apply now'.

'Filming will roughly commence mid February to mid May of 2020 and may take up to 12 weeks,' the site states.

For the record I do not find this man remotely attractive and another sporty Lead would be so boring, IMO.  Plus he's never watched the show - did they learn NOTHING from the Badger fiasco?

There is not enough no in all of Australia to cover this suggestion.  Surprised Jo Scrimshire would put her name to such an article TBH.

Two years ago, most people would scoff at the idea of Married At First Sight 'villain' Dean Wells being The Bachelor.

But all that changed when the 41-year-old 'bad boy' signed a contract with Channel 10 at the start of the year to appear on Dancing with the Stars.

In an unexpected twist, New Idea reports that Dean is now being considered as a potential candidate for The Bachelor 2020.

I don't know who Dean Wells is but he is not an attractive Bachelor. Haven't they learnt. Honey Bager was a flopped. If he is the Bachelor, it will be worse.