The comments sectionon the bachie funny post is very LOLworthy

First of all Angie pops in claiming a “glitch”, then further down in a later comment scolds someone who used a laughing emoji for “laughing at her pain” which to me, confirms a break up?


Then there is some sort of super fan running around commenting everywhere that it’s not true, and they’re still together, as if she knows Carlin and Angie personally, but I suspect she doesn’t.


Carlin drops in about half way down to defend himself of Wrong Reasons accusations, but notably does not make any comment on their relationship status.

And beyond all that the whole thing is awash with sunflower emojis, and people saying “yay, she realised her mistake, now she can be with Timm!” which makes me want to

because IMO they are not suited at all.

@Bobette, I think Carlin is too classy to spill, unless provoked, but I’ve no doubt we will get Angie’s version of things, if she goes scorched earth, he may return fire

Fortunately I think Timm realises he dodged a bullet - dude has been living his best life since the show ended, receiving lots of opportunities while staying true to himself.

He's also about to get renewed attention when BiP finally airs (even though he'll be there for 3-4 eps tops IMO) so I'd hope he wouldn't give Angie a second glance.

Getting back to Carlin, he's definitely upped his profile which was his aim all along IMO and I suspect will quickly find himself a nice vanilla girl to settle down with.

Wouldn't be surprised to see him re-married within a couple of years (an IG story he posted in March confirms he does attend Hillsong, where marriage is encouraged...) 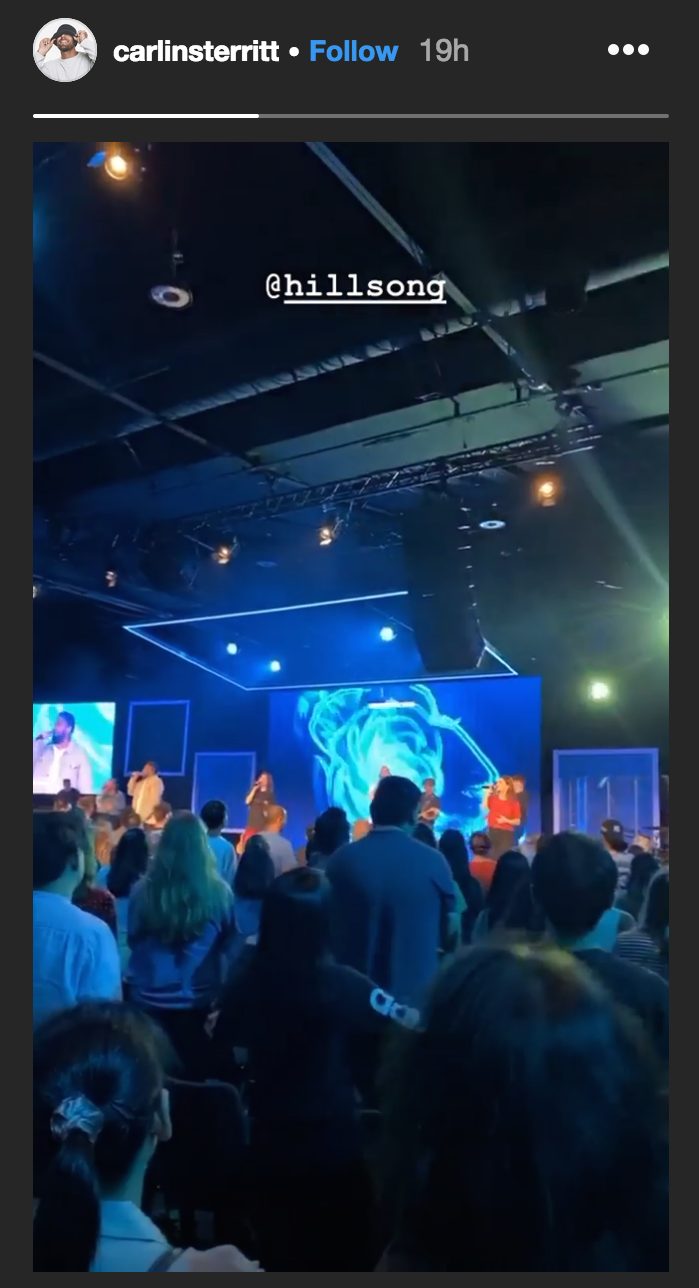 Personally I think there are some deeper issues with Carlin and he is perhaps not being honest with himself about the type of person he would really like to date but I won't go there.

Angie despite her protestations to the contrary will IMO try to get more B-grade TV gigs and advertise whatever assortment of products and services are thrown her way.

She will no doubt also continue to bicker with followers on IG, block anyone who dares question her, and delete comments which don't fit her curated version of "reality".

I am an extremely active Insta user and can't say I have ever seen this unfollow glitch. Also they are untagged in all of each other's so obviously blocked each other, not just unfollowed. Not a good couple years for the franchise. Also laughing at people's pain...you mean like she did constantly on Gogglebox?

I was confused at this: https://www.dailymail.co.uk/tvshowbiz/article-8395975/The-Bachelorettes-Angie-Kent-Carlin-Sterritt-appear-confirm-theyve-SPLIT.html

But @Vjeff Angie’s just a lil ole gal from the Sunshine Coast, when she makes fun of people she’s just keeping it real, and being true to herself, not like all those meanies in the comments section who are big old meanie bullies

@Dirty Street Pie wrote:But @Vjeff Angie’s just a lil ole gal from the Sunshine Coast, when she makes fun of people she’s just keeping it real, and being true to herself, not like all those meanies in the comments section who are big old meanie bullies

totally forgot this hahha so silly of me.

Anyway looks like she can't decide if it was a glitch or a dramatic moment. No offence to anyone here if so but I think it is pretty odd in a relationship to block your partner on Instagram in a fight. I mean I usually just like...go to a different room or something. 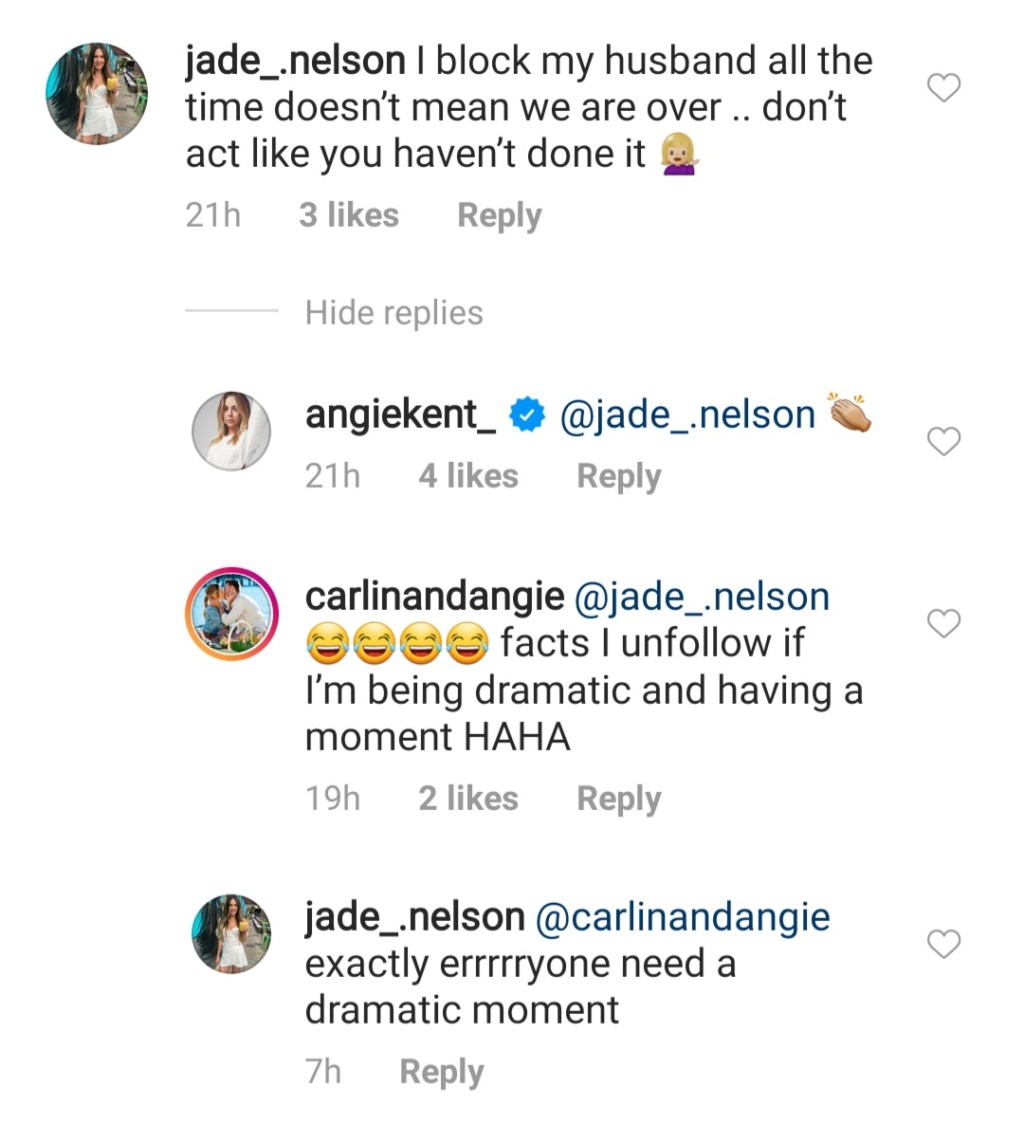 That lady really bragging about blocking her husband on IG all the time like that’s normal or healthy??? Lmfaooooooo

. Ma’am, you might wanna take a good hard look at your relationship...

Jabeen Waheen knows where it's at.

Angie Kent and Carlin Sterritt's romance has played out rather tumultuously in the public eye and has raised a fair few eyebrows in recent weeks.

With Carlin dismissing persistent split rumours, Angie telling inquisitive Instagram followers to 'stay out of it', and the two even unfollowing each other on social media - confused fans have been left in the dark as to why the pair haven't yet come clean about their relationship status.

And the answer may just lie in the pair's hugely successful 'influencer' careers on Instagram, which has seen them rake in thousands of dollars thanks to a slew of joint sponsorship deals - deals that may not be as lucrative if they were to part ways.

This year alone, well-known companies such as Listerine, Nissan and Ecosa Sleep have sponsored the genetically-gifted twosome in exchange for promotion (usually in the form of a picture or short video) on their Instagram platforms.

Earlier this year, the pair were wined at dined at a luxurious retreat in the famous Hunter Valley, while Angie - who picked Carlin as her winner on The Bachelorette last year - has been lavished with endless supplies of makeup from MCo Beauty.

Until recently, Angie and Carlin had been living up to their reputation as Australia's hottest new 'influencer' couple, arguing over who had the worst 'morning breath' in their Listerine ad and gushing that they wanted to 'slosh out with each other for 24 hours' while showing off a comfortable new mattress.

While countless reality stars have made solo careers for themselves on social media, good-looking couples - particularly those with fairytale love stories like Angie and Carlin - are a lucrative alternative for brands who are guaranteed to pay generously.

However, the pair have yet to confirm if they have split, and if so, the reason behind their break-up.

Another reason behind their split may be The Bachelorette's 'love contract', which is rumoured to force contestants to stay together for a certain time period. That, too, hasn't been confirmed.

It's been a few weeks since the pair uploaded an image together, and curious fans have bombarded Angie and Carlin's Instagram profiles demanding an update on their romance.

He clarified that the couple were following each other on Instagram again, after they had briefly unfollowed each other last week.

'Carlin as recently as Thursday has publicly denied the rumours, they are untrue,' his manager said in a statement.

'Angie is on a pre-planned holiday in Queensland with her family while she has the chance.'

On Sunday, Angie fuelled break-up speculation when she told fans to 'stay out of it' after they noticed the pair had unfollowed each other on Instagram.

The former Gogglebox star also blamed the unfollowing on a 'glitch in the system'.

Interestingly, Angie did not deny they had split up. Instead of clarifying the status of their relationship, she told people it was 'none of their business'.

Also re: the bold, the "unfollowing" happened on Sun/Mon, 3 days after Thursday's denial, so his manager's point is moot IMO.

I feel like the QLD story keeps changing. Last week she had returned home after work had dried up in Sydney and now it was a pre-planned holiday? What a stupid comment when the main story we are seeing take over the news is the anger over people not being allowed to holiday in QLD? The only way Angie could go is if she were moving back as a resident.

Only Queensland residents, residents of border communities undertaking essential activities and those considered an ‘exempt person’ are allowed to enter Queensland via air, sea, rail or road from another State or Territory.

If you meet the criteria for an ‘exempt person’ (see below for more details—‘Who is allowed to enter Queensland?’), then please consider applying online for a Queensland Entry Pass to avoid delays at the border.

Even if a person is a Queensland resident or resident of a border community, they must self-quarantine if they have been in a declared COVID-19 hotspot in Australia in the last 14 days, unless they were in the hotspot for an essential purpose, like going to a funeral, or they need to enter Queensland again for an essential purpose, for example to work.

There are special requirements for agribusiness and commercial fishing employees or contractors entering Queensland for work. They must self-quarantine if they have been in a declared COVID-19 hotspot in Australia in the last 14 days.

People moving to Queensland to take up permanent residence will be allowed to enter, but will also be required to self-quarantine for 14 days, which could be at the new residential address.

She has clearly moved home from NSW.

That certainly confirms one cannot simply flit up to QLD for a quick holiday with the rellies. I also notice she hasn't posted anything from QLD (unlike during Dec/Jan when she did often) so it certainly looks like she's trying to hide the fact she slunk back there IMO.

Anyway, IMO she never moved to NSW to be with Carlin in the first place and her fancy Sydney apartment was nothing more than a stage on which to play out their fake relationship and showcase various sponsored products.  Wouldn't be surprised if it was only ever a 6-month lease.

She was barely in NSW, she probably hadn’t changed her drivers licence and electoral roll from Queensland so for all intents and purposes she is still a Queensland resident, and entitled to be there without quarantining. For all that she’s posting she could even be quarantining on the Sunshine Coast and we wouldn’t know.

Yeah I agree she was never serious about living near Carlin IMO - it seems to me that she never really gave up her "I don't need no man" mentality and was just milking all publicity she could while under contract and now, almost 12 months to the day since filming started, she's right back where she started, living with her parents' and most likely just as single as she started out IMO.