@provenceguy wrote:What did you guys think of Kaitlyn and Tayshia on the show last night. I thought they were too giggly and added nothing.

I was mixed on them.  Definite improvement over paternalistic CH but I'm hoping they will get in a groove and find their roles a bit better as the season goes on.  I think it's hard to share the hosting gig.  But I'm guessing they were great support for Katie especially since they had to stay on the property all the time (whereas CH would just show up for RCs, etc.).

IMO both didn’t know what to do with themselves outside small talk and tap on Katie’s shoulder.

Here they are both nice but 2 is too much. I think first night they had no idea what to do

Recap szn is BACK.

We recap #TheBachelorette premiere + have an interview with the Bachelorette herself @katiethurston.

INTERVIEW: @katiethurston chats with https://t.co/UNtCHG4jnG about the ups and downs of her ride as #TheBachelorette.https://t.co/f6O9D9I4V3


#BachelorNation is still questioning why #TheBachelorette's Aaron and Cody got heated during the season 17 premiere — and Us Weekly has answers. https://t.co/U6l7GrJljI 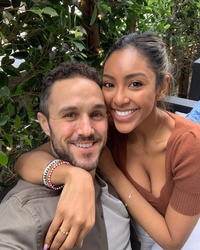 We talked to designer @RandiRahm about @katiethurston's stunning Night One look on #TheBachelorette premiere! https://t.co/ArOuxFB5JA

We talked to designer @RandiRahm about @katiethurston's stunning Night One look on #TheBachelorette premiere! https://t.co/ArOuxFB5JA

I have enjoyed many of the Randi Rahm dresses we’ve seen on the show. But I had no idea how egotistical Randi is. Really full of herself in that interview.

We're celebrating by dropping facts about #TheBachelorette roses the rest of June!

Did you know that on The Bachelorette, the men's roses have green floral tape wrapped around the stem? (They fasten to the jacket with a magnet!)

Katie mentioned in a story today that she will be turning her condo in WA into a rental. She was asking what people thought of flooring options and then dropped that info.

I wonder if she’s staying in WA or moving elsewhere?

What did you guys glean from Katie’s reactions to Kimmel’s picks? I do think she has a good poker face but here are my thoughts:

Andrew: Katie seemed nervous and was trying hard not to give a thing away. Was she nervous because he’s F1 or because his was the first pic of Kimmel’s game?

Connor: Katie was more relaxed, probably because he’s not likely even in the F4.

Greg: Kimmel said Katie wouldn’t even look at his picture. Interesting. At one point I noticed a slight flash of annoyance or anger when Kimmel was talking about Greg. Was she not looking at Greg’s pic because she didn’t want to give away he’s F1 or because she’s still a bit salty if he bailed on her?

Things are getting WILD tonight at 8|7c when Katie and Greg go on their first date on ABC's #TheBachelorette! pic.twitter.com/TO61TEjcsv

What is this dirt parking lot they sit in?

When was the last time the FIR person got the first date?

Also, I thought some of their interactions in that short clip were awkward.

Katie is very flirty with Greg. You can see why he makes it to the F4.