@Jolena I got the same result. I don't know what is going on. I tried several different shows from different countries and kept getting the same thing.

@Sprite wrote:@Jolena I got the same result. I don't know what is going on. I tried several different shows from different countries and kept getting the same thing.

Is there a way we can find out what the problem is ? Do you know if it's only here in the U.S. that all of a sudden we can't connect? TIA

Yeah damn I'm getting the same thing.  Might be RIP Archive. 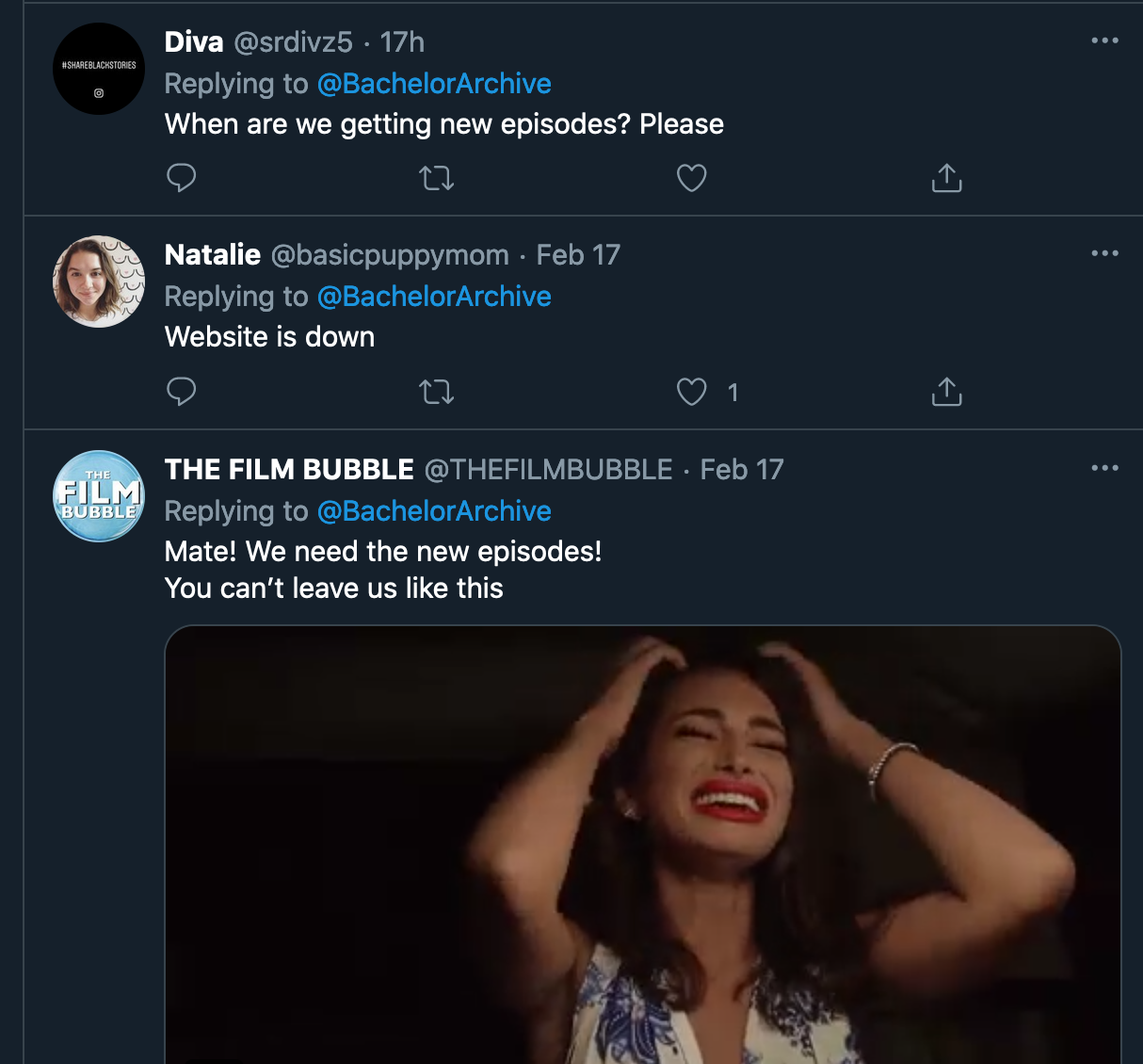 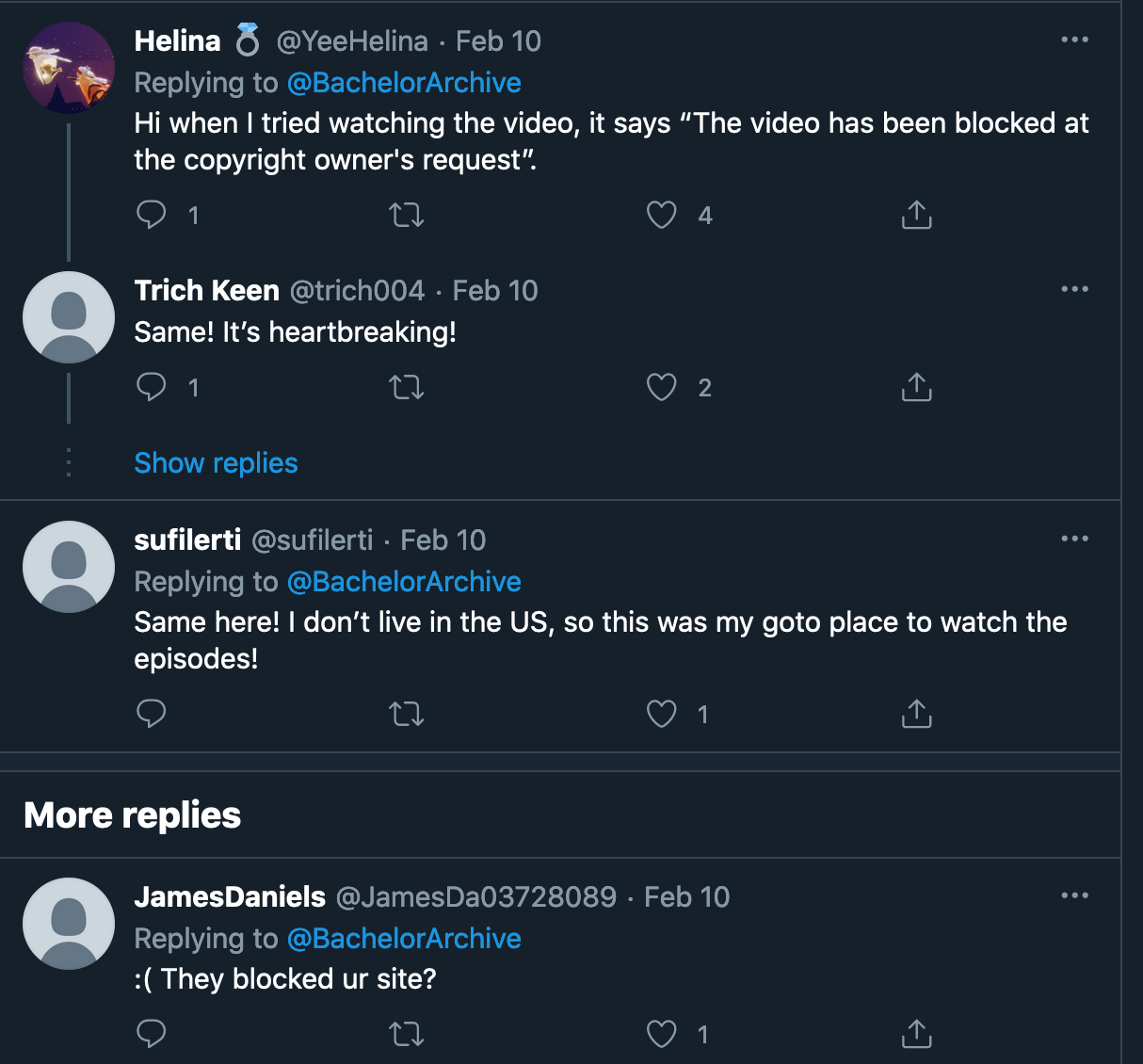 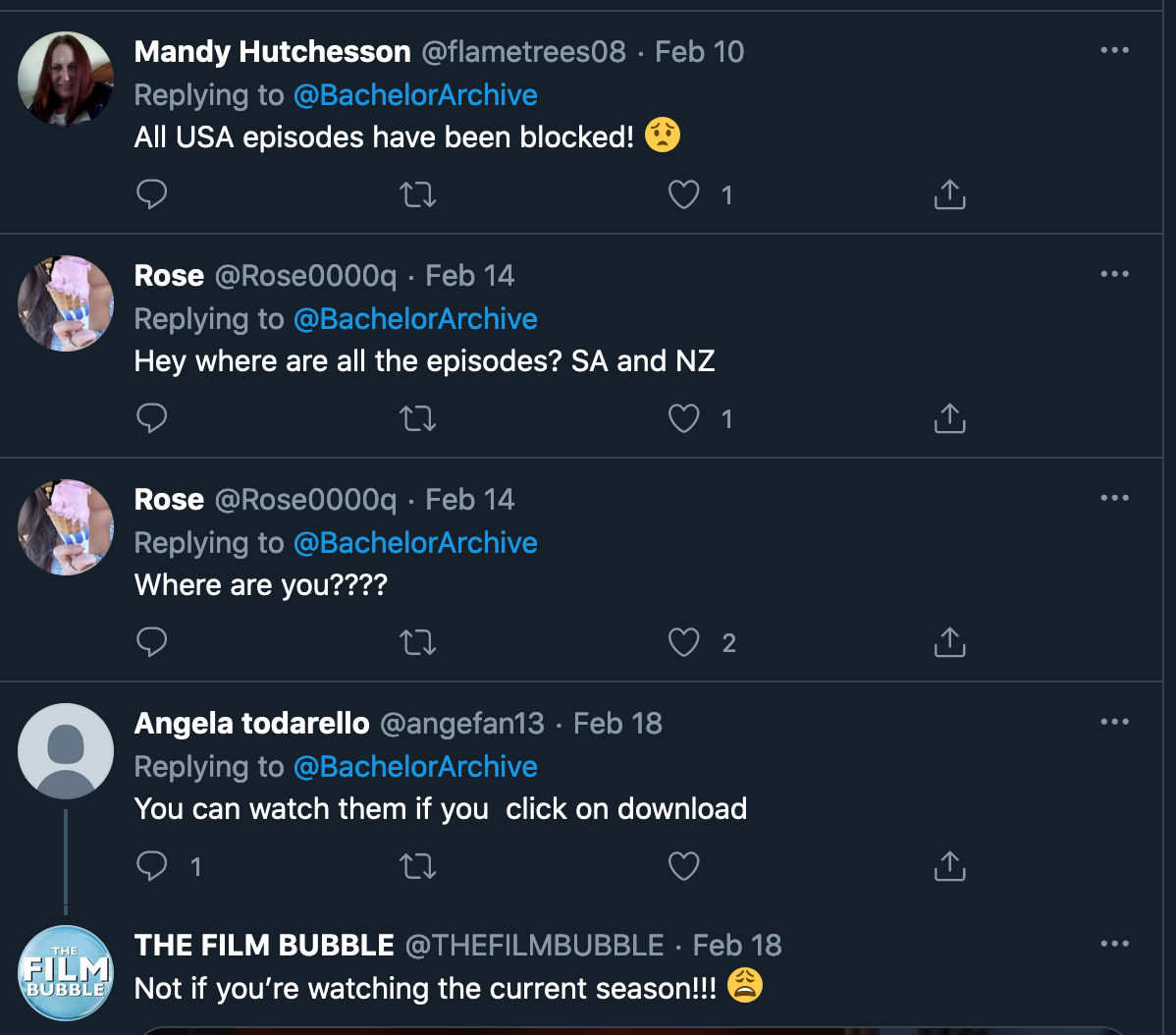 This is probably Josh Frydenberg's fault in some way.

OH NOOOOOOOO!!! this is horrible. I am in the US and I so wanted to watch the ETTE for NZ and SA!!!!

Does anyone know any other way to watch episodes related to the international versions  for AUS/SA/NZ?

TVNZ OnDemand offers video-on-demand streaming of the most popular TV shows in the country. ... To unblock and stream your favorite shows while overseas, you have to bypass regional restrictions. That's what Unlocator VPN and Smart DNS allow you to do.

@Dusty Rose Thanks for the info. I know I had to use a VPN since I am in the states to watch all the international Love Island series.

I guess I will reconnect with the VPN I used then.

@Dusty Rose wrote:TVNZ...offers video-on-demand streaming...To unblock and stream...you have to bypass regional restrictions. That's what Unlocator VPN and Smart DNS allow you to do.

I watched the first three episodes on the Bachelor Archive website. When new episodes weren't posted I got impatient and subscribed to a VPN so I can watch the episodes on TVNZ. Well worth the money IMO

@Dusty Rose wrote:...does Todd not make the list because he’s not country enough or just because he’s Aussie?.... Lexi is amazing - have you seen her IG bevvie and a Bachie?..

Thanks for letting me know about Bachie and a Bevvie. I'm so impressed Lexie wants to reach out to the men she sent home so we can see their friendship and how they're doing post filming.

I found it interesting that Lexie skipped episodes 2/3 and went straight to episodes 4/5 when she had her single dates with Hamish/Todd. She said Hamish was easy to talk to, their relationship was natural and fun, and she thought he was funny. She didn't talk at all about Todd's single date.

During episode 4/5 Lexie told Itay that Todd saw him at the gym. She seemed really comfortable talking about Todd to Itay. I don't think Lexie chose Todd since he's not a Kiwi. Maybe my prediction about the Hamish/Joe rivalry is wrong and Todd did make it to F2?

This is such a short season. It was a big surprise to see that Bachelor NZ will start at soon as Lexie's season ends. I look forward to it

Just as I expected Jack left before the Rose Ceremony in episode 9. In spite of their "raw magnetism" Jack didn't feel comfortable introducing Lexie to his family since he hadn't had a single date. Lexie thought the age difference was a barrier. She didn't think they would last long term.

Jessie came in mid season as the lone intruder. He already knew several of the men and became a confidant with others. Jessie and Lexie both agreed since he wasn't there from the beginning there wasn't enough time to develop a real connection so he left before the Rose Ceremony.

Jessie thinks Joe is the best match for Lexie. Joe thinks Paul has a good connection with Lexie but can't decide who the frontrunner is. Todd thinks his biggest competition is between Hamish and Joe.

Lexie is "shaken up" by Jack's departure and doesn't make it back to the Rose Ceremony. Art tells Hamish, Joe, Todd and Paul they're also going home. Which made them nervous until he said to "hometowns"

The men are now rooming together in Auckland. Hamish gets the first Hometown. Lexie thinks her relationship with Hamish is easy and they have a strong connection. She loves the fact he is "super kiwi"

Hamish and Lexie went out on his boat to catch some fish. Hamish caught one small fish they threw back. Since they didn't catch any fish they decided to catch some Kina's. They only found one Kina. Hamish said Lexie was the "catch of the day".  When it was time to leave Hamish couldn't start his boat. Another boat came by to assist Hamish get the motor running. Not a "perfect date" Lexie liked the fact even though their were challenges Hamish took them in stride.

It's important to both Hamish and Lexie that they fit in with their families. Hamish's dad was impressed Lexie ate the Kina. Hamish's mom liked the fact they both have the same energy, like to travel, have fun and want a family. Lexie said their date was "unbelievably awesome"

Joe had the next hometown. Lexie was concerned their relationship hasn't been developing. She doesn't really know anything about Joe. She wanted to know if they can have fun together. Joe took Lexie to a waterfall where they had a lot of physical chemistry. Their relationship doesn't seem as easy and natural as Lexie's relationship with Hamish.

Joe's Mom thinks Lexie is lovely. Her concern is she doesn't think they have enough passion. She noticed that when they were sitting together Lexie was leaning away from Joe not towards him. Joe understood what is Mom was saying and felt her observations may be accurate.  Lexie liked their "brilliant conversations" she said it was easy and she felt relaxed.

For me after these two singe dates Hamish is the frontrunner. The next episode will have Lexie's hometown dates with Todd and Paul.

Good recap I am astounded that at ep9 we are half way through the hometown dates? Watched Lexis latest Bachie and a Bevvie where she says that Vas was upset leaving- then she said that generally tensions rising with the boys in the house - she then goes on about how tough for them - no phones, being judged, competition etc - sounded to me an excuse for Hamish getting the edit that he was being a sook. She may think she’s wearing her poker face but I think she’s revealing way too much - interesting that she’s got it past production.

@jen689 thanks so much for the recap!

During Tuesdays episode Todd and Paul have their hometown dates. Toddy as Lexie calls him gets the first date. Lexie likes Todd more and more every time she see's him. He's cuddly and playful. They had a normal date walking aroung Auckland until it was time to have a virtual hometown with Todd's Mom and Grandma. Todd is an only child from an Italian family. They had a virtual cooking class where Todd's Grandma taught them how to make homemade Ghocchi. Todd's mom and Grandma both like Lexie. The virtual cooking class went great!

Once they finished cooking they shared the Ghocchi with two of Todd's friends Josh and Jason. Jason is from the same town as Lexie. Lexie's Nan taught Jason and his Dad in school and she was Jason's favorite teacher! In spite of the hometown connection the friends were hard on Lexie. They wondered if she was genuine or was she being coached by production to say what they wanted to hear. Lexie got defensive and said they don't know her. They were concerned about the age difference and wanted to find out if Lexie would be willing to move to Australia. Josh and Jason don't think Lexie and Todd will have a happy ending.

Lexie likes Paul because he is laid back and chill. Paul took her to the upscale restaurant Paris Butter. Paul said he's never met a girl who is so exited about food. Lexie wondered if their only connection is food. Paul's mom is from Figi. She gave Lexie lessons on Figi traditions. Paul's mom though Lexie was lovely and hopes to see her again. Paul was realistic and reminded his Mom there are still three other men. After spending time with Paul's family Lexie and Paul sat in the back of a vintage car where Paul gave Lexie a ring which has had a massive impact on him. He wanted to let Lexie know she has had a massive impact on him as well.

At the Rose Ceremony Joe was feeling confident. The other three were very nervous. Hamish said emotions are popping up that he's not use to. Lexie's first chat was with Hamish. She was concerned when Hamish told her he's only had two girlfriends one in high school and one long term girlfriend.  Todd and Lexie talk about their age difference and Lexie wanted to know if Todd would be willing to stay in New Zealand. Todd thinks he's going home. Paul tells Lexie he doesn't like the waiting game but he knows it's part of the process. Joe was relaxed until Lexie brought up their roller coaster relationship. Joe said the environment was hard for him. They decide to end their relationship and Joe leaves before the Rose Ceremony.

Lexie gives roses to Todd and Hamish who meet Lexie's family. Todd goes first. They go fishing with Lexie's cousin Sarah and her Nan and Pop. Pop wants to know if Todd will stay in New Zealand. Todd says yes but Pop is worried he'll want to go back to Australia. Lexie's family likes Todd.

During Todd's date Hamish decided to go fishing to show Lexie he really can catch fish. He caught several fish and made a fish dish to share with Lexie's family. Lexie's dad was very impressed with this gesture. Both of Lexie's parents like Hamish. Lexie says she didn't have instant chemistry with Hamish. She wonders if they are friends that are trying to be romantic. During Hamish's conversation with Sarah he tells her that he's had challenges with relationships in the past and often gets friend zoned.

Next week Todd and Hamish will have their fantasy dates.

I agree! After watching the episodes just by her facial expressions and her tone of voice it was apparent that Hamish and Todd would be Lexie's F2. I watched episode 10 live and was surprised to see Lexie in commercials!